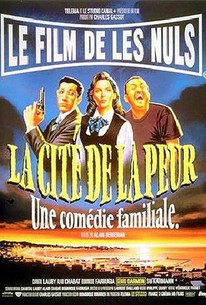 This French comedy parodies horror movies and detective films. It is set at the Cannes Film Festival. There, Odile, a sincere publicist, tries to promote the horror movie "Red Is Dead." The movie tells of a killer in a welding mask who wields a hammer and sickle with deadly results. The trouble begins when a real killer with the same m.o. begins knocking off projectionists at market screenings. In true publicist form, Odile immediately brings the film's star to the festival. To protect him, Odile hires a handsome bodyguard. Odile finds herself romanced by a police commissioner. Meanwhile a stranger lurks in the distance.

Eddy Mitchell
as A Projectionist

Jean-Christophe Bouvet
as Alain
View All

There are no critic reviews yet for La Cité de la Peur. Keep checking Rotten Tomatoes for updates!

There are no featured audience reviews yet. Click the link below to see what others say about La Cité de la Peur!