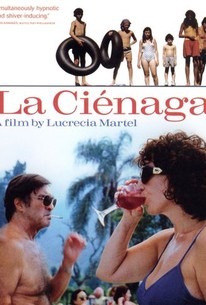 Two families try to make the best of a bad situation as they suffer through a crippling heat wave in this neo-realistic drama, featuring a primarily non-professional cast. Tali (Mercedes Moran) is minding four small children with little help from her husband, who is preoccupied with the opening of hunting season, as a record hot spell grips Argentina. Things aren't much better for her cousin Mecha (Graciela Borges), who is looking after four teenagers and a husband (Martin Adjemian) who can hardly be bothered to help out, but Mecha does have a pool, even if it hasn't been cleaned in quite a while. Tali and her brood end up spending much of the summer with Mecha as the town is riveted by the appearance of the Virgin Carmen on the city's water tower, and a series of thunderstorms add an awful humidity to the summer's unbearable heat. While seemingly improvised, La Cienaga was actually carefully scripted by Lucrecia Martel, who won a screenwriting award at the 1999 Sundance Film Festival prior to making her directorial debut with this feature.

Diego Baenas
as Joaquin
View All

Every shot is dense with life, with children and animals running in and out, yet the movie is highly focused, a small masterpiece.

There's a real energy in the way that La Cienaga takes nothing for granted -- except your attention and your intelligence.

Look closely and you'll find something not often present in your average art-house flick -- a hint, intense and unsettling, of art itself.

Martel glues together a disjointed picture of a society where tension lies only skin deep.

La Ciénaga does what cinema at its best can do: It reveals a universe we've never even imagined and then gets us to look differently at both the society and medium we'd underestimated.

An early image of a suntanned chest impaled by the shards of a broken wine glass becomes an emblem of Martel's ability to draw blood from her subject matter.

The air of stultifying decadence is captured to a T by Martel. It's a reminder that as well as being a brilliant technician and visual artist, she is an exemplary writer too.

...the air is equally thick with boredom and dread.

Martel doesn't try to connect the dots with typical continuity editing either, opting instead to focus on textures and fleeting movements

the most remarkable debut in recent experience

There is something fascinating in the way this brilliant film is constructed, directed and edited, as Martel draws a dreary, uncomfortably humid (and even hilariously exaggerated) portrait of Northern Argentinian bourgeoisie, especially with regards to social oppression.

this film is one of those discomfort making works like mike leigh's naked or solondz' happiness. the study of a bourgeois family on vacation, mostly having a miserable time: there's no real plot here but the ending, when it comes, seems inevitable. rather stunning for a debut film. be warned: there are virtually no likeable characters. i'd love to see more of martel's work

A very promising debut from Lucrecia Martel. No real plot but that doesn't matter when it's such a great study a family life. Beautifully shot also.

La Cienaga is the story of two bourgeoise families on a summer vacation in their country house in Argentina. Alone, isolated from urban life, unavoidably close to each other, the family members face their own decadance as a group and push themselves, inentionally or not, to the the verge of complete domestic destruction. Nothing works: they don't understand each other, don't like each other, can't stand each other. The mother is sick, and so sick of life that she prefers to remain sick in bed rather than keep living like she used to. The father is an detached figure in a corner. The brothers and sisters are, of course, in the wake, the middle, or the end of adolescence, with all its respective problems and dilemmas. The other family contains a shallow, overworking mother, a taciturn, passive father, and their little children. The Swamp is crowded, and noisy; Lucrecia Martel perfectly translates the sticky and unconfortable sensation of humid hot weather, the smell of wet vegetation, dirty pools, brown-water rivers, and the phony cool of electric fans all over the place. All actors and actresses are excellent in their roles, and it's beautifully shot, making the most out of inanimate objects jus as well as characters doing superficial, day-to-day tasks, to create that unconfortable atmosphere of familiar-but-uncertain. Although it lacks a plot per se, there's an everpresent feeling that what is happening is leading someplace. Martel also masterfully creates sexual tension, loads of it, in a film where no sex takes place whatsoever, and where all the characters are, well, related. Regardless of whether it's awkward, Martel goes for it because it's real. La Cienaga a slow-paced, rambling study of the human condition that builds tension until the unavoidable ending. GREAT. One of the best Argentinian films I've seen.