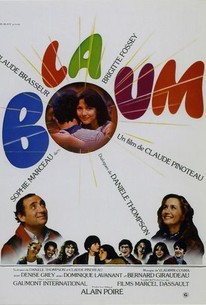 La Boum stars Sophie Marceau as a 13-year-old French girl, coping with domestic problems. Her parents, played by Claude Brasseur and Brigitte Fossey, are on the verge of a marital breakup. This is coupled by a traumatic move to Paris, and Marceau's problems in adjusting to her new surroundings and schoolmates. Though nothing new, La Boum is disarmingly diverting, a real audience pleaser (as proven by its huge international box-office take). Even as the film was making the American rounds, a sequel, La Boum 2, was in the editing stages.

Robert Dalban
as Serge
View All

There are no critic reviews yet for La Boum. Keep checking Rotten Tomatoes for updates!

There are no featured reviews for La Boum at this time.