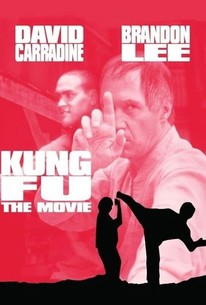 This 2-hour revival of the old David Carradine TV series was originally titled simply Kung Fu. Set in the west of the late 19th century, the film stars Carradine as Caine, the mystical Chinese-American priest who wanders the countryside seeking spiritual fulfillment-and occasionally busting a few bad-guy heads. Stopping over in a small town, Caine learns that an opium ring holds the townsfolk in thrall. Before the sun sets, Caine is engaged in a fierce martial-arts duel with a mysterious young man (played by Brandon Lee, son of Bruce). It comes as quite a jolt to Caine when he learns that his opponent is his own flesh and blood. Though Kung Fu: The Movie, originally telecast February 1, 1986, did not immediately result in a series, David Carradine would star in an updated version of the property, Kung Fu: The Legend Continues, in 1992.

Mako
as The Manchu

Benson Fong
as The Old One

There are no critic reviews yet for Kung Fu: The Movie. Keep checking Rotten Tomatoes for updates!

There are no featured reviews for Kung Fu: The Movie at this time.