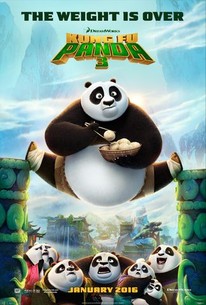 Critics Consensus: Kung Fu Panda 3 boasts the requisite visual splendor, but like its rotund protagonist, this sequel's narrative is also surprisingly nimble, adding up to animated fun for the whole family.

Critics Consensus: Kung Fu Panda 3 boasts the requisite visual splendor, but like its rotund protagonist, this sequel's narrative is also surprisingly nimble, adding up to animated fun for the whole family.

Critic Consensus: Kung Fu Panda 3 boasts the requisite visual splendor, but like its rotund protagonist, this sequel's narrative is also surprisingly nimble, adding up to animated fun for the whole family.

In 2016, one of the most successful animated franchises in the world returns with its biggest comedy adventure yet, KUNG FU PANDA 3. When Po's long-lost panda father suddenly reappears, the reunited duo travels to a secret panda paradise to meet scores of hilarious new panda characters. But when the supernatural villain Kai begins to sweep across China defeating all the kung fu masters, Po must do the impossible-learn to train a village full of his fun-loving, clumsy brethren to become the ultimate band of Kung Fu Pandas! (C) Fox

Rank Jack Black’s 10 Best Movies
New Certified Fresh Movies on Netflix and Amazon Prime: Major League, Get Shorty, Lots of James Bond, and More
How Family-Friendly are The BFG and The Legend of Tarzan?

It may serve up exactly the same mix of mayhem, noodles and dumplings as the first two films in the series, but Kung Fu Panda 3 is still energetic and wildly entertaining fare.

There is plenty in Kung Fu Panda 3 that echoes the first film and the sequel, but it's not tired recycling. Instead, the movie deftly reinforces and extends what has gone before.

The film is simultaneously sweet, simple and savvy.

Decent, generic fun for all the family.

Nothing short of a tranquilliser dart or a polo mallet to the back of the head is apparently going to stop the gobsmackingly successful Kung Fu Panda franchise.

Starting in the exploding mountains of the spirit realm and concluding with a spectacular musical set piece - what else but Kung Fu Fighting? - this third instalment of the animated children's franchise knows how to impress.

Flowing freely between styles inspired by anime, Pixar, and Asian woodcuts, Kung Fu Panda 3 is easily the most visually lush film DreamWorks has ever produced.

Be it Panda-Rific, Perfectly Panda or Panda-monium, one thing is for certain when we're talking about Kung Fu Panda 3 - It's the Best.Panda.Ever.

These are surprisingly strong but incredibly relevant themes for a children's movie, and Yuh continues to relay them with humor and grace.

It's exciting, funny, sweet and I was consistently entertained. I want to give a special congrats to director Jennifer Yuh Nelson.

Powered by humour, a plethora of colours, textures and - most importantly - a strong story, Kung Fu Panda 3 is a film that ensures the panda himself has a legacy.

"Kung Fu Panda 3" is very well done, the characters fun, and the fight that Po has to handle, both personal and otherwise, make for an enjoyable animated feature that teaches good lessons, while still remaining entertaining.

The animation is gorgeous and the action is fun, as before. But neither the plot nor the jokes are as on point as in the first two films. The panda village is adorable of course, so kids will hardly notice. They will have difficulties with the very spiritual finale, I imagine.

As a third film, KFP3 just doesn't live up to the stakes and complexities that were progressively built up from its previous installments. If anything the movie was a huge step backwards for the franchise. The script is much less mature, pandering to younger audiences. The message simplistic and the threat of some ancient kung-fu master come-back-to-life turning martial artists into Jade statues just didn't have the grandeur of KFP2; Where all of fictitious China was under threat by a conqueror who didn't blink twice at Panda genocide with an army at his command plus a technological super weapon. There are less martial art sequences with fights being too few and far in between. With the story's key "epic battles" being a bunch of children and seniors fending off masters in a comical fashion and the final showdown looking more like an overuse of special effects than well thought out choreography. Po's existential struggles with discovering himself and "who he is" parallels to what was already done in 2, rendering that entire subplot redundant. To top it off, less creative set-pieces and also the Furious 5 were utterly useless, with even Master Shifuu turning into "fodder" for Kai. However, it is probably one of the most visually stunning animated films I've seen in a long time. Just the sheer bold use of color and 2D stylization was quite a marvel to look at. A visual spectacle for sure but just a massive narrative disappointment after what we were given in 1 & 2.

The long-awaited sequel delivers a fury of laughter and gags that surpasses the previous films' thresholds, but more hits and misses were a result. But thanks to Kung Fu Panda 3's warm-hearted storytelling, stylistic vision & animations, moviegoers will find the share of action, humor and entertainment satisfying. 4/5