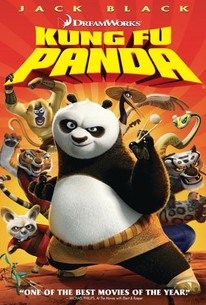 A clumsy panda bear becomes an unlikely kung fu hero when a treacherous enemy spreads chaos throughout the countryside in this animated martial arts adventure featuring the voices of Jack Black, Dustin Hoffman, Angelina Jolie, and Jackie Chan. On the surface, Po (voice of Black) may look like just another portly panda bear, but beneath his fur he bears the mark of the chosen one. By day, Po works faithfully in his family's noodle shop, but by night he dreams of becoming a true master of the martial arts. Now an ancient prophecy has come to pass, and Po realizes that he is the only one who can save his people from certain destruction. With time running short and malevolent snow leopard Tai Lung (Ian McShane ) closing in, Furious Five legends Tigress (Jolie), Crane (David Cross ), Mantis (Seth Rogen), Viper (Lucy Liu), Monkey (Chan), and their wise sensei, Master Shifu (Hoffman), all draw on their vast knowledge of fighting skills in order to transform a lumbering panda bear into a lethal fighting machine. Now, if the noble Po can master the martial arts and somehow transform his greatest weaknesses into his greatest strengths, he will fulfill his destiny as the hero who saved his people during their darkest hour. ~ Jason Buchanan, Rovi

Emily Robison
as Bunny Fan No.1
View All

There's something about the look of Kung Fu Panda that is so novel and pleasing. Perhaps it's just that we haven't seen this vintage, Far East world in a computer-animated movie before.

The animation work is dazzling; it's lovingly detailed without being overdone (particularly the opening sequence, which is hand-drawn and looks like prints struck from ancient woodblocks).

As the credits roll, the film's many flaws come sharply into focus. But while it lasts, Kung-Fu Panda is something of a guilty treat.

Manages to entertain and dazzle, and parents won't beat themselves up for sitting through it, although what it teaches could fit on a fortune cookie.

This Panda delivers a cuddle more than a thump.

Hands down the most visually striking of DreamWorks Animation's releases, this lively CGI comedy is tailor-made for Jack Black.

It's not the first or the last film to sermonise the idea of "never giving up," but there is a certain charm in seeing a collector of action figures, an indolent slug, turn into an animal-bashing Bruce Lee.

Kung Fu Panda is ripe with genuine wisdom, and like any Kung Fu film, it delves into some pretty fascinating spirituality.

This is a charming film, full of wit and character that makes it a worthy addition to the Dreamworks library of films.

'Kung Fu Panda' was an evolutionary jump in what the Dreamworks animation had offered until then. [Full Review in Spanish]

It's not a bad movie. I just didn't love it like I was hoping too.

If film is supposed to be entertaining there's no problem here as you'll find yourself drawn in one way or the other. For instance, this peppers along so well that your complaints are out the window and gone before they're even given voice, which is to say that it's pretty good considering it's the second sequel.

Outrageously entertaining! Jack Black, along with the rest of the voice cast, does an incredible job of making us believe that these animals are actually part of a kung fu team. I loved this movie from beginning to end. The witty humour, the hidden adult humour, the fight sequences, the visuals, and the storytelling, are all small elements that come together to make this movie one to remember. Dreamworks has definitely hit it's mark in super-stardom. I can praise this film all day long, but it's familiar story arcs and constant cliches do get tiresome. Overall, this film has everything you would want, but also everything you'd expect, which may or may not hurt the film for you. This film is so much fun to watch and I highly recommend it to people of all ages.

Funny and quite stylish, but entirely insubstantial, which is ok.

A fun movie that me and my daughter both enjoyed. Skadoosh!!