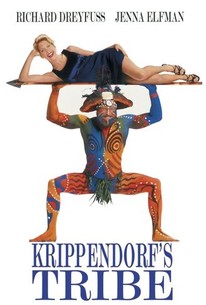 Todd Holland directed this Charlie Peters adaptation of Frank Parkin's novel. Respected anthropologist James Krippendorf (Richard Dreyfuss) and his wife, Jennifer (Barbara Williams), bring their three children along during their failed search in New Guinea for a lost tribe. After Jennifer's death, James reaches a zero point back in the U.S., having spent all his foundation grant money raising the kids as a single parent. Scheduled to lecture at a college and fearful he could be charged with misuse of grant funds, James concocts an imaginary tribe, the Shelmikedmu, and fakes a 16 mm "documentary" film, casting his children as tribe members and editing in footage of a legit New Guinea tribe. Anthropologist Veronica Micelli (Jenna Elfman) contacts cable-TV producer Henry Spivey (David Ogden Stiers), forcing James to continue creating fraudulent footage as the rival Ruth Allen (Lily Tomlin) gets suspicious. It seems a shame this racially insensitive film was made, while the once-announced plans to film anthropologist Kenneth Good's nonfiction Into the Heart (Simon & Schuster, 1991) never led to a production.

Grace Lee
as College Student No. 1

Todd Cattell
as College Student No. 2

Rachel Winfree
as Lecture Woman No. 1

Suanne Spoke
as Lecture Woman No. 2

Catherine Paolone
as Lecture Woman No. 3

Wendy Worthington
as Secretary
View All

Krippendorf's Tribe, a surprisingly enjoyable piece of piffle, is pure Disney all the way, replete with a wholly preposterous plot, engaging performances and a feel-good, lesson-teaching ending.

Is it possible to recommend a whole comedy on the basis of one scene that made you laugh almost uncontrollably? I fear not. And yet Krippendorf's Tribe has such a scene, and many comedies have none.

A hateful, disgusting and amoral travesty.

The fact that people loved this movie is beyond me; the fact that it was an Oscar contender blows me away.

Dreyfuss deserves a whole lot better than this garbage.

Though it settles for easy laughs, the laughs remain appreciated.

In order to find Krippendorf's Tribe funny, you must agree with it on one fundamental principle: Penises are funny.

Look at Richard Dreyfuss on the poster, weep for him, and then rent something else.

the miscasting of Ms. Elfman as someone with a brain defies belief.

Ooga-Booga! Richard Dreyfuss is hilarious in this movie when he invents his own lost tribe. A fun comedy.

Quite how we're expected to swallow the idea that a collection of eminent anthropologists would be fooled by Richard Dreyfuss' wife and kids running around a middle american suburb in grass skirts is beyond me, but he's his usual likeable self in an inconsequential but inoffensive family comedy.

This family film is wildly funny and Richard Dreyfuss & Jenna Elfman are hilarious.