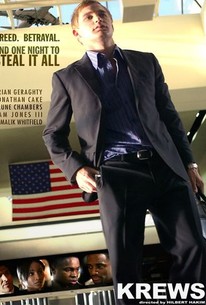 Two different breeds of gangsters become rivals and then uneasy allies in this action drama. Henry (Brian Geraghty) and Peter (Jonathan Cake) are a pair of upscale white-collar criminals who make their money doing extra-legal manipulation in European cash markets. But Henry has some very bad news as he meets up with Peter in Los Angeles -- a deal to buy Polish currency went haywire, and now the two are deep in debt. Peter is furious, but he and Henry have other things to worry about when they're carjacked by two streetwise thugs, Slate (Ty Hodges) and Wishbone (Sam Jones III). Henry and Peter aren't prepared to give up their car without a fight, and as the four criminals square off, it leads to a free-for-all that leaves Peter seriously injured and two policemen dead. Realizing they need to stick together for their own good, Slate and Wishbone take Henry and Peter off to the hideout of gang leader Rebob (Charles Malik Whitfield) as they brainstorm a way out of the crisis. Krews was the first feature film from director Hilbert Hakim.

Faune A. Chambers
as Tamara

There are no critic reviews yet for Krews. Keep checking Rotten Tomatoes for updates!

There are no featured audience reviews yet. Click the link below to see what others say about Krews!