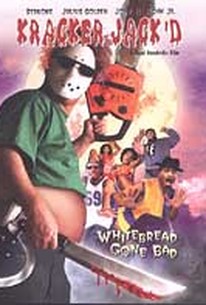 Playa, Bling, Swole, Spliff, and Carlton are friends from the 'hood who decide to throw a house party despite the urban legend of a previous house party killing spree. While handing out flyers advertising the event, they are approached by a rather lonely white guy who just wants to be accepted in the crew and asks to be invited. Instead, they decide to beat him up as a joke. By nightfall, just as the party is in high gear, the killing starts. Is this the ultimate act of revenge?

Kracker Jack'd is low-class endeavor with the comedic touch of a sledgehammer. It's not low-brow humor; it's no-brow humor.

There are no featured audience reviews yet. Click the link below to see what others say about Kracker Jack'd!