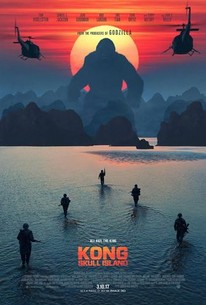 Critics Consensus: Offering exhilarating eye candy, solid acting, and a fast-paced story, Kong: Skull Island earns its spot in the movie monster's mythos without ever matching up to the classic original.

Critics Consensus: Offering exhilarating eye candy, solid acting, and a fast-paced story, Kong: Skull Island earns its spot in the movie monster's mythos without ever matching up to the classic original.

Critic Consensus: Offering exhilarating eye candy, solid acting, and a fast-paced story, Kong: Skull Island earns its spot in the movie monster's mythos without ever matching up to the classic original.

Kong: Skull Island is just good enough-the sharp allusions, the moments of wit and warmth supplied by Reilly's long-abandoned airman-to make one wish it were better.

The CGI Kong is cool.

There's enough material out there to fuel a string of reboots, but the swing toward diminishing returns has already begun.

It's fun to watch the [monsters] in action, but on the human side, the film is clumsily written, over-cast and underacted, with only frustrated soldier Samuel L. Jackson striking the right tone of crazy amid the chaos.

The action and special effects are mostly first-rate and Vogt-Roberts maintains a vaguely satiric tone that sidesteps schlockiness.

Creedence Clearwater Revival thrums on the soundtrack - has any '70s movie managed to avoid it? - but when the giant spiders start stomping, Vogt-Roberts earns the right to blast "Run Through the Jungle."

Kong: Skull Island is a magnificent and impressive giant monster epic, that also feels very small and personal at the same time.

If you want to see King Kong kick ass, this movie is for you. [Full review in Spanish]

Individual moments are incredibly fun and exhilarating, and the giant monsters are precisely as giant and monstrous as you can hope. But too many others are tedious and painfully dull.

It's weird. It's like Full Metal Jacket with King Kong.

This movie is a mess in so many ways.

It is hard to care about anything in this visually aseptic (yet occasionally enjoyable) monster movie whose CGI is so artificial that it feels like watching someone play video game - including an awful excess of lens flares and too much boring action for very little substance.

Unlike it's predecessors Skull Island isn't a Hollywood fusion of romance, drama and action. Rather It's definitely a Monster flick through and through. I think the simplicity in the Kaiju-bashing genre in conjunction with the movies approach in direction is what makes this work. Without the skills of Vogt-Roberts this reiteration just might have been a dud, there are definitely notable stylistic choices in camera use, visuals and music that makes this film stand out. It also helps to have an all-star cast that knows what they are doing. The humans are there to facilitate Kong who's the real lead of the story, but these actors know how to add just enough character to their roles to engage the viewer. Kong works by being exactly what it has to be and not overreaching. Although someone will have to explain what justified hiring Tian Jing to be a sex doll on the set.

Jordan Vogt-Roberts digs out a trek across uncharted territory in Kong: Skull Island. Nearly 2 hours goes by before the calm returns to the island. There is a pretty decent pace pushing the story along, but it hurts the character development to a certain extent. Part of it is there are too many characters to work with and follow. Another part is there are a plethora of monster scenes that there isn't enough time spent with all the humans. The action is destructive and massive. There is no shame in showcasing Kong on screen and this is a good thing. Kong displays his power against the skullcrawlers. Of all the human characters, Samuel L. Jackson and John C. Reilly offer up the most interesting performances. Kong gets much on love screen, probably even much more than any of the humans. Kong: Skull Island drops the seismic charges and delivers an explosive traverse across the island.