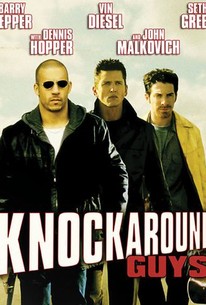 Critics Consensus: Well-acted, but it's too derivative.

Critics Consensus: Well-acted, but it's too derivative.

Critic Consensus: Well-acted, but it's too derivative.

A big score goes wrong in a big way for a bunch of aspiring gangsters in this crime comedy. Matty Demaret (Barry Pepper) is the son of a mid-level Brooklyn mob boss, Benny "Chains" Demaret (Dennis Hopper). When Matty was 12 years old, Benny and Uncle Teddy (John Malkovich) decided to see if Matty had what it took to be in the mob; they gave the boy a gun and ordered him to shoot a longtime enemy of the family. Matty lacked the nerve to do it, and ever since, Benny has been convinced his son is a coward. As an adult, Matty is stuck between a rock and a hard place; he'd like to work as a sports agent, but his family's criminal ties make that all but impossible, and his dad won't give him a chance in the family's operations. Uncle Teddy decides to give Matty a chance to make good by asking him to pick up a payment of $500,000 in Spokane, WA. Matty puts together a crew of three friends, all sons of mob guys, to help him out: muscle bound Taylor (Vin Diesel), ladies' man Chris (Andrew Davoli), and cocaine-addled would-be pilot Johnny (Seth Green). Getting the money goes just fine, but during a refueling stop in Montana, Johnny has to hide the money to keep it from being discovered. It's then promptly stolen by a pair of burnouts. When Matty and his crew discover the money is missing, they head back to Montana, but before long, they find out that the sheriff (Tom Noonan) is onto them, and that he has his own plans for the cash; they also learn that Uncle Teddy has some plans he didn't tell them about. Knockaround Guys marked the directorial debut for the screenwriting team of Brian Koppelman and David Levien.

Nicholas Pasco
as Freddy the Watch

Michael A. Miranda
as Noriega

Andrew Francis
as Matty at 13

John Liddle
as Heslep the Barkeep

Ceciley Jenkins
as Claire the Waitress

Jennifer Baxter
as Terri the Waitress

Allan Havey
as Dean the Greenskeeper

Bruce McFee
as Devin the Bartender

Angela White
as Bernadette the Waitress

Kim Kopyl
as Blonde No. 1

Hayley Verlyn
as Blonde No. 2

Tony Nappo
as Tony the Waiter

Robert Hilton
as Cloutier the Clerk

George Buza
as Earl at the Gunshop

Moira Dunphy
as Mary the Deskclerk

Lester Cohen
as Waiter No. 2

Doug Pepper
as Waiter No. 3

Peter Natalizio
as Peter the Croupier

Real gangsters often love gangster films, but it's a safe bet that Knockaround Guys won't be on their all-time hit list.

This heist flick about young Brooklyn hoods is off the shelf after two years to capitalize on the popularity of Vin Diesel, Seth Green and Barry Pepper. It should have stayed there.

Perhaps if co-directors David Levien and Brian Koppelman had spent more time devising a coherent vision for the film, we would not have felt as knocked around after watching it.

We know the plot's a little crazy, but it held my interest from start to finish.

Will only satisfy those who can't tell the difference between the good, the bad and the ugly.

Even with Vin Diesel's help, Knockaround Guys got knocked around a few times too many.

It might have been better served with only one director.

No less stale than the many derivative crime thrillers that flood the direct-to-video market.

Even the top ensemble case of Knockaround Guys, headed by the ever-remarkable John Malkovich and charismatic Vin Diesel, can't jump the brick wall that the script hits in the last 20 minutes.

What sounds like a formula for freakish violence and a torrent of incessant expletives is in fact a stylish mobster film that stands out due to some very inventive casting.

Diesel is excellent as a compassionate pre-XXX tough guy (the film has been on the shelf for nearly two years).

Everywhere they go, they're sure to be a hit. Good movie. It's no Goodfellas, but this watchable, well-crafted little mob story is easy to take, and goes a long way on its appealing cast and dark, profane sense of humor. Vin Diesel kicked ass, don't mess with him. Nice good story which entertained me late at night. The acting was decent, nothing bad to say about this movie. Popcorn movie to watch with your guy friend's. The four sons (Diesel, Green, Pepper, Davoli) of major Brooklyn mobsters have to team up to retrieve a bag of cash in a small Montana town ruled by a corrupt sheriff. Specifically, the story gets started when Matt Demaret (Pepper) goes on a job to deliver the money for his mob father (Hopper) on the advice of his uncle (Malkovich). Things don't go as planned though...

Barry Pepper, Vin Diesel, John Malkovich, Dennis Hopper, Seth Green, Dov Tiefenbach The film follows four sons of well-known Brooklyn-based mobsters and their desperate fight to retrieve a bag of cash in a small Montana town ruled by a corrupt sheriff. As they unite to find the money, they come face-to-face with the bloodshed and betrayal that is their birthright. ~~~~~~~~~~~~~~~~~~~~~~~~~~~~~~~~~~~~~~~~~~~~~~~~~~~~~~~~~~~~~~ I thought it had a great cast. Thought the movie was good. Little slow to begin with but got better as it went. Good little mob story.

Did John Malkovich owe these guys some money or something?