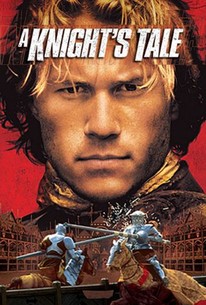 Critics Consensus: Once you get past the anachronism, A Knight's Tale becomes a predictable, if spirited, Rocky on horseback.

Critics Consensus: Once you get past the anachronism, A Knight's Tale becomes a predictable, if spirited, Rocky on horseback.

Critic Consensus: Once you get past the anachronism, A Knight's Tale becomes a predictable, if spirited, Rocky on horseback.

This crowd-pleasing medieval adventure tale is very loosely inspired by Geoffrey Chaucer's The Canterbury Tales and mixes the anachronistic elements of modern-day rock music and colloquialisms with a period setting and characters. Heath Ledger stars as William Thatcher, a low-born 14th century squire who, in a fit of inspired spontaneity, replaces his deceased employer as the competitor at a jousting competition. Jousting is a pastime only permitted to knights, who are of noble birth, but Thatcher wins and decides to continue his new pursuits. With the help of his two fellow squire friends Wat and Roland (Alan Tudyk and Mark Addy) and none other than the gambling-addicted Geoffrey Chaucer (Paul Bettany), Thatcher has soon adopted a false identity and is winning one joust after another on his way to a championship in London. His victories inspire the affection of a female fan, Jocelyn (Shannyn Sossamon), and the ire of a competitor, Count Adehmar (Rufus Sewell), but Thatcher's ruse is threatened with exposure. A Knight's Tale is the sophomore directorial effort of acclaimed screenwriter Brian Helgeland, who won an Oscar for his work on L.A. Confidential (1997) and debuted behind the camera with the troubled production of Payback (1999). ~ Karl Williams, Rovi

Berwick Kaler
as Man in Stocks

Jan Nemejovský
as Smithee
View All

News & Interviews for A Knight's Tale

View All A Knight's Tale News

Critic Reviews for A Knight's Tale

There are worse crimes than crowd pleasing, but at least do it with some finesse.

Whipping along at speed, with elaborate camera movements and rousing speeches, this knows how to engage a crowd. It's corny, of course, but a guilty pleasure: romantic, diverting, with mildly amusing modern gags.

It's an enjoyable romp and Heath Ledger is a likeably vulnerable hero and Mark Addy a good-natured realistic foil.

The approach may be highly original, just as the ingredients are familiar but Helgeland has fashioned a delicious new recipe from them.

Instead of pulling young audiences imaginatively back into the past, A Knight's Tale cheapens the process by demonstrating that there's no essential difference between then and now.

The movie promises to rock you, and much of the time it does.

Most movie-goers today want a movie in which they can believe. And A Knight's Tale manages to seem sincere, and, at the same time, embrace the anachronisms of a chivalrous tale for the new millennium.

It's as if Helgeland didn't have enough confidence in his own material's basic appeal that he resorted to desperate pandering.

Endless jousting tournaments transpire with lots of balsa wood jousting poles splintering across the screen. It's a classic example of a "'what-on-earth-were-they-thinking" movie...

For all its mainstream exertions, A Knight's Tale is actually something of an experimental melding of old and new.

Audience Reviews for A Knight's Tale

Even 15 years later you gotta applaud the idea of someone making a knight movie using rock songs, outlandish (female) hairdos and gowns so very naturally and is that was simply how medieval times played out. A brave attempt that worked out. It's a fun joust with great characters, seriously touching moments and plenty of good laughs. Blowing dust off old stereotypes yet lovingly using some of them just makes for a great ride.

Ledger didn't rock me but it's still quite a good, enjoyable movie. Paul Bettany 's role as Chaucer was excellent. Loved the soundtrack and didn't mind the anachronisms.

Okay spoof of medieval movies but what starts out as a jaunty adventure takes far too long to finish up.