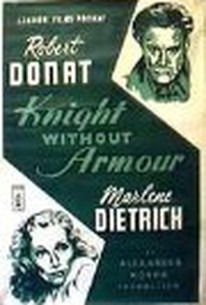 Marlene Dietrich and Robert Donat star in this gripping melodrama about the Russian revolution, based on the novel by James Hilton. Donat plays A.J. Fothergill, a British interpreter in St. Petersburg who is ordered to leave Russia after writing an article that criticized the czar. Fothergill meets a British secret agent who can arrange for him to stay in Russia if he will agree to spy for England and monitor revolutionary groups trying to depose the czar. Fothergill infiltrates a group planning to kill Russian nobleman Vladinoff (Herbert Lomas); the radicals bomb Vladinoff's coach, but he and his daughter, Alexandra (Marlene Dietrich) escape unharmed. Fothergill is arrested and sent to Siberia. When the monarchy is deposed during the Russian Revolution in 1917, Alexandra is arrested by Communist forces and put on trial. Fothergill is freed from prison with his friend Axelstein (Basil Gill), and they are now revolutionary heroes. Alexandra must go to Petrograd to face trial and Fothergill is chosen to escort her. When they reach the train station, Fothergill discovers the White Army (fighting to restore the czar) is coming. He leads Alexandra to safety behind the White Army lines, but the Red Army has surrounded the city and Fothergill, smitten with Alexandra, rescues her again before the city is shelled. ~ Paul Brenner, Rovi

Irene Vanbrugh
as Duchess of Zorin

Critic Reviews for Knight Without Armour

The direction of individual scenes is good, sometimes excellent, but the film as a whole is formless.

A big-budget sumptuous love-on-the-run adventure story, with the chaotic Russian revolution of 1917 in the background.

Audience Reviews for Knight Without Armour

robert donat is in deep cover with russian revolutionaries and winds up in siberia. after two years he's released and made assistant to a commissar in the new soviet government. one of his first assignments is to accompany the beautiful countess alexandra to petrograd to stand trial. instead he tries to help her escape. full of romance and espionage; a terrific adventure story! a bit anti-communist but all in the service of making la dietrich look like a goddess ;)