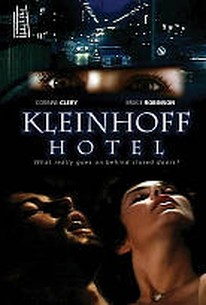 A co-production between Italy and Monaco, this steamy study of sexual obsession was directed by Carlo Lizzani (Crazy Joe). It takes place in a Berlin hotel where Penthouse pet Corinne Clery is an architect's wife who becomes overwhelmed by her attraction to a leftist guerrilla (Bruce Robinson), a fugitive from the government because of his terrorist activities. Clery begins her obsession with mere voyeurism, but grows emboldened enough to practically fling herself at Robinson, leading to the expected tragic consequences. Michele Placido co-stars with Katja Rupe and Werner Pochath, and the film features several familiar names behind the camera, including composer Giorgio Gaslini and editor Franco Fraticelli, both frequent collaborators of genre luminary Dario Argento.

There are no critic reviews yet for Kleinhoff Hotel. Keep checking Rotten Tomatoes for updates!

There are no featured reviews for Kleinhoff Hotel at this time.