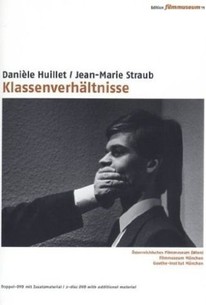 Financed in Germany and filmed in New York, Class Relations is adapted from Franz Kafka's unfinished novel Amerika. Christian Heinisch plays a bourgeois German forced to leave his homeland after a scandal. He accepts his uncle's invitation to move to America, where he takes a succession of "Joe Jobs." Heinisch tries, but he is unable to shake off his old-world customs. Worse, the class structure in Europe never prepared him to have to actually use his hands to make a living. Rather than tack on an ending of their own, writer/directors Daniel Huillet and Jean-Marie Straub conclude Class Relations in the same manner that Kafka left Amerika behind when he died--with the hero's ultimate fate still in limbo.

Reinald Schnell
as Heizer
View All

Straub and Huillet have filmed Kafka in unslavishly faithful fashion, with a serenity strangely belying the venerable controversy which still cramps the cinematic adaptation of classic texts.

Though, at times, seemingly absurd and lacking Kafka's philosophical punch, the prickly dramatization is inexplicably mesmerizing.

There are no featured reviews for Klassenverhältnisse (Class Relations) at this time.