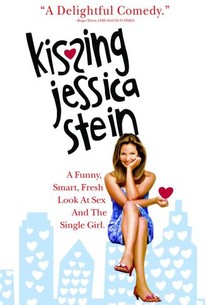 Critics Consensus: A trite but refreshing and comical spin on nature of love.

Critics Consensus: A trite but refreshing and comical spin on nature of love.

Critic Consensus: A trite but refreshing and comical spin on nature of love.

A woman searching for the perfect man instead discovers the perfect woman in this romantic comedy. Jessica Stein (Jennifer Westfeldt) is a woman with a solid career as a copy editor, but her love life isn't much to write home about; she's been through a long series of disastrous first dates that refuse to evolve into second dates, and the well-intended advice of her best friend Joan (Jackie Hoffman) and former boyfriend Josh (Scott Cohen) isn't helping a bit. One day, Jessica is scanning personal ads in the newspaper with her friends, and she sees one with a quote from her favorite poet. Jessica reads on to discover that she has a lot in common with the person who placed the ad -- too much so, since it turns out the notice is from a woman, Helen Cooper (Heather Juergensen), who manages an art gallery. Jessica figures it would at least be nice to hang out with someone who shares her interests, and she gives Helen a call. Jessica and Helen quickly strike up a close friendship that evolves into something more intimate, though neither of them has ever been involved with another woman ... and Helen is a bit more avid about her new romantic horizons than Jessica. As their relationship progresses, Jessica finds herself struggling with her feelings about her new sexual outlook, and she isn't sure how to break the news about her relationship to her mother (Tovah Feldshuh) as she tries to decide if she should bring Helen along to her brother's wedding. Kissing Jessica Stein was based on the off-Broadway play Lipschtick, which was written by Jennifer Westfeldt and Heather Juergensen, who starred in the original stage production as well as this film adaptation; the film won both the Critics' Special Jury Award and the Audience Award at the 2001 Los Angeles Film Festival. ~ Mark Deming, Rovi

Ben Feldman
as Himself

The cast is wonderful and the story is commendably free of the sectarian us-versus-them tone of many romantic gay movies.

Director Charles Herman-Wurmfeld's movie knows what it wants, what its limits are, and delivers its delights accordingly.

Westfeldt and Juergensen's wordy script tries for both mainstream and offbeat, but gets lost in between.

Westfeldt and Juergensen are both appealing actresses.

Venturesome yet unthreatening, this movie is box-office smart enough to seem cutting-edge without ever drawing blood.

Sweet comedy about when a girl meets girl.

Charles Herman-Wurmfeld's comedy remains the best film spawned by "Sex and the City." This sharp-tongued story about emotional curiosity and the politics of passion draws on the words of a dead Austrian poet to muse about modern romance.

I was very angry with the ending of this film.

What neither the trailers nor the newspaper features written about Kissing Jessica Stein will have prepared you for is quite how funny it is.

It's the best kind of chick-flick, fun and intelligent without being pandering.

Three years of writing, rehearsing, and performing Jessica together helped develop the film organically for Westfeldt and Juergensen.

I have a girl crush on Jennifer Westfeldt (which seems appropriate for this movie about a buttoned-up Jewess trying on lesbianism to find her [7] true love[s]). Too bad she's all in a committed long-term relationship with hunk-o-man Jon Hamm. Westfeldt as Jessica is so adorably neurotic and girl-next-door-pretty. My perennial favorite, Scott Cohen, is mean and tough but also sweetly anguished. Jessica and Helen's romance blossoms awkwardly and hilariously at first, but the moment Jessica comes over to take care of Helen when she's sick is a nice turning point. The movie debates homosexual politics a bit, but it doesn't end with a clear message about whether one should be with her own sex or the other. It also doesn't cheapen Jessica's lesbian relationship as a dalliance. I also love how the script sneaks in bunches of word-nerd humor and suffering artist philosophy. Judy's monologue about how Jessica quitting the school play because she thought her costar wasn't good enough - and only really hurting herself - is a metaphor for her dating life is eloquent and insightful. Josh's realization at his happiness for Jessica's painting and his own novel writing is a necessary reminder for all creative artists. Blech.

Just a really inspirational movie. It's all worth it for the single scene where Helen is sick.

I thought this movie was supposed to be more of a comedy (just my perception, not a misleading trailer as often happens). So I got over that easily and enjoyed it.

Sexuality in film is a very delicate thing. It can either be very offputting and offends the general public and the LGBT community, or it's innovative without being condescending to the audience or just highly unrealistic. This film is full of realism, it's heartfelt and loving with the relationship between two women, one of whom is straight to the point of repression, while the other is a free spirit who isn't defined by her sexuality in any context. Both are complete opposites in personality, history, and ethics at times. Somehow these women find a strange version of friendship and sexual upheaval, as Jessica navigates the new maze of lesbianism, and her partner becomes increasingly sexually frustrated with the antics of her Jewish princess of a girlfriend. It's a varied path for this girl who has always identified as straight, and is slowly falling into different ways to see herself. In the modern world no one has to stick to their assigned box, and so this film not only explores what it means to have sexual preference, but more importantly whether you love based on gender or based on sex. Jessica is perfectly neurotic, and her character is actually well fleshed out beyond that characteristic. She also fears failure to a great degree, which is another reason why she is so repressed and lacks the conviction to tell anyone about her new relationship. The other two principle roles are that of Jessica's ex (Cohen) and the woman she falls for (Jeurgenson). Jeurgenson and Westfeldt co-wrote the film, and act as equals throughout, always friends during the rollercoaster of their courtship. It's really remarkable while staying classically romantic and sweet. Just another example of gay going mainstream.