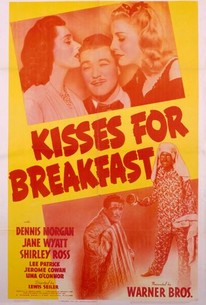 Kisses for Breakfast is a dumbed-down remake of the 1930 marital comedy The Matrimonial Bed, itself based on a British stage play by Seymour Hicks-which in turn was adapted from a French farce by Yves Mirande and Andre Mouzey-Eon. With that pedigree, it's amazing that this frenetic 1941 slapsticker isn't better than it is, but it just isn't, that's all. Knocked out during a fight, Rodney Trask (Dennis Morgan) awakens with amnesia, totally unaware that he's just married Juliet Marsden (Shirley Ross). His only clue to his identity is an address found in his coat pocket, which leads him to the South Carolina home of Juliet's cousin Laura Anders (Janet Wyatt). A year passes, during which Rodney straightens out Laura's financial problems and wins her love. After their marriage, Rodney and Laura decide to visit her northern relatives-including, naturally, wife number one, Juliet, who has come to believe that Rodney is dead and is about to take a new husband. What follows is a endless series of silly slapstick gags, with poor Juliet receiving a great deal of unwarranted punishment at the hands of the capricious Laura. The mess eventually straightens itself out, by which time both heroines have thorougly alienated the audience.

Fred Graham
as Double for Cornel Wilde
View All

Critic Reviews for Kisses for Breakfast

There are no critic reviews yet for Kisses for Breakfast. Keep checking Rotten Tomatoes for updates!

There are no featured reviews for Kisses for Breakfast at this time.