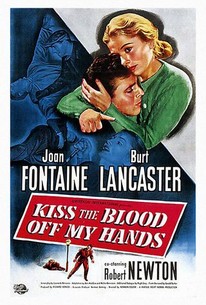 In this film noir drama, Bill Saunders (Burt Lancaster) is a former Prisoner of War living in England whose experiences have left him emotionally unstable and prone to violence. One night, while drinking in a pub, he gets into an argument with the owner which quickly escalates into a brutal fist fight; Bill kills the publican and flees with the police giving chase. Bill is given shelter by Jane Wharton (Joan Fontaine), a kind-hearted nurse who believes Bill when he tells her that the killing was an accident and that he's innocent of any wrongdoing. Bill soon gets in a fight with a policeman and ends up in jail, but Jane, who has fallen in love with Bill, still has faith in him, and upon his release she finds him a job driving a truck delivering drugs for the clinic where she works. Career criminal Harry Carter (Robert Newton), who witnessed Bill's murder of the pub owner, now sees a perfect opportunity for blackmail, and he forces Bill to tip him off for his next major drug shipment, which can then be routed to the black market at a high profit. Bill has little choice but to agree, but when Jane ends up tagging along when Bill is to make the delivery in question, he refuses to jeopardize her and makes the delivery to the clinic without incident. This quickly earns Harry's wrath, and they soon find themselves at the mercy of a very dangerous man. Miklos Rozsa composed the film's highly effective score. ~ Mark Deming, Rovi

Harry Wilson
as Man in Pub

Wesley Hopper
as Man
View All

Critic Reviews for Kiss the Blood Off My Hands

The soap opera romance felt as phony as the London dock scenes.

There are no featured reviews for Kiss the Blood Off My Hands at this time.

Kiss the Blood Off My Hands Quotes