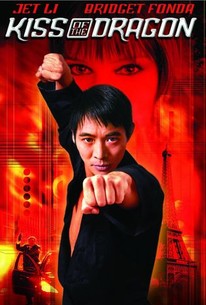 Critics Consensus: A formulaic actioner that's sure to please action fans. Those looking for plot, believability, or character development will have difficulty finding them.

Critics Consensus: A formulaic actioner that's sure to please action fans. Those looking for plot, believability, or character development will have difficulty finding them.

Critic Consensus: A formulaic actioner that's sure to please action fans. Those looking for plot, believability, or character development will have difficulty finding them.

Kiss of the Dragon Photos

This action thriller co-written by filmmaker Luc Besson stars Jet Li as Liu Jian, a Chinese intelligence officer in Paris on an assignment that finds him in the midst of an international conspiracy. When Liu's investigation gets too close to uncovering the truth, his life is seriously jeopardized and he's forced to creatively employ his martial arts skills, which includes using a pool ball and the French flag as defensive props. In the meantime, romantic sparks fly between Liu and a sexy witness (Bridget Fonda), while the agent discovers that a trusted French peer (longtime Besson featured player Tcheky Karyo) is actually the double-crossing criminal mastermind he's seeking. ~ Karl Williams, Rovi

Isabelle Duhauvelle
as Isabel
View All

Critic Reviews for Kiss of the Dragon

A supremely satisfying blend of Hong Kong mayhem and Gallic flair that can only bolster Li's escalating reputation.

Whack! Thworp! Crack! Sometimes, it's fun to sit back and enjoy the spectacle of bad guys getting their heads beaten in.

Li jumps into a series of martial arts sequences of flying fists and balletic moves that truly reinvigorate a genre that has gone stale even in Asia.

The characters in Kiss of the Dragon are more cardboard than usual for an action movie.

Kiss of the Dragon offers just about a kill a minute, but less than a thrill a minute.

Kiss of the Dragon does have a sense of its own absurdity, but that doesn't prevent it from cloaking the inherently comic kung-fu genre in a seriousness so solemn that it could be French.

A disappointing follow-up to Jet Li's Romeo Must Die.

Jet Li film is not for kids.

Jet Li's true masterpiece of the 2000s is a blitzkrieg of crazy, hard-R martial arts. Forget the need to always know who's beating whom or why in a narrative that's basically negligible. "Dragon's" gritty, giddy grindhouse thrills trump logic.

A return to form for Li who dropped all the hip hop crap and was allowed to put his raw skills on display...

The formulaic story cannot weigh down the high-flying, visceral excitement that the film offers in generous doses.

Audience Reviews for Kiss of the Dragon

A hard-boiled and and awesome action-packed thriller. A sizzling, sexy, thrilling and explosive shocker from start to finish. The action is fast, relentless and utterly furious. Jet Li packs pure star power along with his incredible skills, he proves that he's one of the greatest martial arts action stars to ever hit the screen. WIth Master Li and Producer, Luc Besson you can only get amazing with this explosive combo. It's filled with adrenaline-charged action that truly knocks you out. Tcheky Karyo is electrifying. Bridget Fonda is fantastic.

Worth watching for Li's martial arts but with a story loosely and formulaicly strung together you can't help but feel guilty while you cruise through this action flick. Oh well, at least it was better than his other film; Unleashed (Danny the dog.)

Not my favorite Jet Li outing, but it is Jet Li, so you know it's gotta be really bad for me to give it any fewer than three stars. I'd want more martial arts and less Bridget Fonda to give it a higher rating.

A decent action film with plenty of well choreographed fight scenes. The plot is very basic and not original there are a few lulls between the action scenes but overall it's an entertaining way to spend 90 minutes.

Kiss of the Dragon Quotes