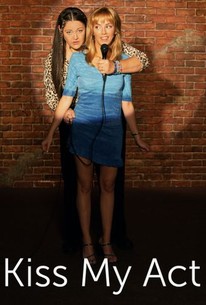 An aspiring comic who has to hide behind others to get her humor in front of an audience finds you can't do the same thing when it comes to romance. Samantha Berger (Camryn Manheim) works as a bartender at a New York comedy club; possessing a sharp imagination and a quick wit , Samantha writes jokes of her own in her spare time. Samantha's material is good, but she's severely self-conscious about her weight problem, so she shops her routines to up-and-coming comics who play the room, most frequently Jennie (Alexondra Lee), a friend who is slim and beautiful but can't write a good gag to save her life. Michael True (Scott Cohen) is an agent who frequents the club looking for new talent, and he thinks Jennie might have what it takes to make the big time. Michael soon finds himself developing a relationship with Jennie off stage as well, but she's never sure what to say to him and is afraid that one day he'll realize the killer material she's been using isn't her own. Michael starts e-mailing Jennie on a regular basis, and Jennie convinces Samantha to play Cyrano and answer his missives posing as Jennie. But the longer Samantha finds herself "chatting" with Michael, the more she realizes he's just the sort of man she's always wanted -- but lacks the courage to approach on her own. Camryn Manheim also served as executive producer for Kiss My Act, which debuted on the ABC television network on April 23, 2001; the supporting cast includes Dabney Coleman and Marlee Matlin.

Phyllis Diller
as Herself

Critic Reviews for Kiss My Act

Some of this is very funny... Some of it's sadly painful, like the fat jokes. And much of it is more symbolic than a body ought to have to bear, like sign language, e-mail, and ventriloquism in one movie. But Camryn does knock us dead.

A charming fusion of -- of all things -- Cyrano de Bergerac and Punchline, ABC's Kiss My Act clearly spotlights Camryn Manheim's ability to play a romantic lead with the best of 'em.

Audience Reviews for Kiss My Act

There are no featured audience reviews yet. Click the link below to see what others say about Kiss My Act!