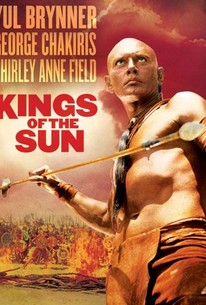 Kings of the Sun Photos

In this drama, a young man becomes the new Mayan king after his father is killed in war. He moves his tribe from Mexico to the coast where he must do battle with a local chief of a different tribe. During the fight, the chief is wounded. The opposing king's betrothed helps him recuperate and the two leaders decide to live in peace until the Mayan king's old nemesis, determined to destroy the Mayans appears and attacks them. The king and the local chief join forces to stop him. The fight results in the death of the chief who tried to protect his new friend, the king.

Ford Rainey
as The chief

Jose Elias Moreno II
as the Youth
View All

Critic Reviews for Kings of the Sun

There are no critic reviews yet for Kings of the Sun. Keep checking Rotten Tomatoes for updates!

Audience Reviews for Kings of the Sun

There are no featured audience reviews yet. Click the link below to see what others say about Kings of the Sun!

Kings of the Sun Quotes