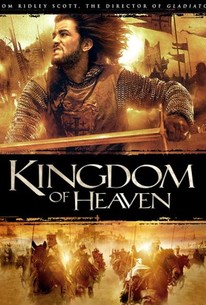 Critics Consensus: Although it's an objective and handsomely presented take on the Crusades, Kingdom of Heaven lacks depth.

Critics Consensus: Although it's an objective and handsomely presented take on the Crusades, Kingdom of Heaven lacks depth.

Critic Consensus: Although it's an objective and handsomely presented take on the Crusades, Kingdom of Heaven lacks depth.

Kingdom of Heaven is an epic adventure about a common man who finds himself thrust into a decades-long war. A stranger in a strange land, he serves a doomed king, falls in love with an exotic and forbidden queen, and rises to knighthood. Ultimately, he must protect the people of Jerusalem from overwhelming forces - while striving to keep a fragile peace.

News & Interviews for Kingdom of Heaven

View All Kingdom of Heaven News

Critic Reviews for Kingdom of Heaven

The miscasting of the lightweight Bloom proves fatal: instead of galvanizing this epic, he sucks the energy out of it.

As Balian and his people withstand the might of Saladin's fiery projectiles, siege towers and the usual computer-generated swarm of soldiers, it's hard not to think we're really watching The Lord of the Rings IV: Legolas Defends Jerusalem.

Is Orlando Bloom enough of a star to sustain a $100 million costume drama? The answer turns out to be yes.

Since we barely know what's at stake -- we're too confused and bored to care -- all this fighting means nothing to us, and yet Scott still hopes to rev us up with it.

Even with the addition of 45 minutes of new footage, Sir Ridley Scott's Kingdom of Heaven remains a rather uneventful epic with a story that fails to engage.

Just another sword and sandal epic...

Kingdom of Heaven is profoundly relevant for our troubled times.

... an extraordinary work of art, a plea for religious tolerance that works because of sheer filmmaking prowess and good, old-fashioned storytelling. (Director's Cut)

One of the more violent films in recent memory. But maybe the violence serves a purpose-it keeps your mind off the inanities of the plot.

Audience Reviews for Kingdom of Heaven

Interesting subject matter, and capable (if overly glossy) cinematography, but something in this film just didn't come out right. I think there was too much build up to most events; though the plot was interesting, everything developed so slowly that the sting had been taken out of the events before they occurred. That, and I didn't buy Orlando Bloom in this part - too young and too pretty. Didn't reward the investment it required, and could have trimmed some fat to make for a better watch.

Ridley Scott takes it slow and steady with Kingdom of Heaven.

It is no secret that this film goes to great lengths to tell its story. The run time, for one, is a massive 3 hours. It isn't a quick sit through, nor does it feel like it with only a moderate pace. On the other hand, the costumes and set design are visually pleasing. When it comes to the story, there isn't a whole lot that can be deemed unnecessary, as most of it does fit nicely together.

The violence is bloody and the action is as it should be. Nothing fancy when it comes to the choreography; just large clashes, especially in the final hour.

The cast is solid. The supporting roles tend to outshine Orlando Bloom, but since the characters come and go, it is Bloom that ends up with the most to deliver. The likes of Eva Green, Jeremy Irons, and David Thewlis are just a few of the standouts throughout the picture.

Kingdom of Heaven isn't a masterpiece, but it is a recommendable picture if one has 3 hours to spare.

The director`s cut of the film makes this a materpiece. It adds more accuracy and vison to Scott`s firece and bloody epic of dazzling power and dedication. An exhilerating and spectacular action-packed adventure epic. A stunning, stylish, deeply moving and jaw-dropping historical epic that ranks with Gladiator and Braveheart. Director, Ridley Scott has crafted another fine masterwork. It`s jammend with awesome and well-crafted battle sequences. A truly magnificent cast. Orlando Bloom is teriffic, crafting a surprisingly enduring and compelling performance. Liam Neeson and Jeremy Irons are superb. Edward Norton is brilliant.

As much as I enjoyed this, I think I would have liked it more had I watched the director's cut and not the flawed and disliked (by Scott himself) theatrical cut. Regardless, this is a sweeping epic that is beautiful to look at, has amazing costumes, sets, art direction, and cinematography, and features music that is a delight to listen to. It's a given that this, and others like it, are historically inaccurate and fictionalized. That is to be expected. I may be a historian, and although the events and time depicted are not my speciality, I have taken a class on the Crusades, and can weigh in more easily about what is right and wrong with the depictions. Whether I have extensive knowledge of things in any historical film or not, I am generally very tolerant and understanding of things, and try not to do too much condemning. I wished there was better character development and better plotting, both of which I hope the director's cut fixes. The performances were generally pretty good, and while I don't think Orlando Bloom can quite carry a film on his own yet (like he has to here), he's getting better .The supporting cast is terrific, with major props going to Irons, Green (despite murkiness with her character), the unrecognizable Norton, and the guy who played Saladin. The battle scenes are terrific, and they are choreograped and executed quite well. It's also nice to note that the use of extras and real animals and props took place over CGI. Even though they are flawed, the non battle scens are good too; Maybe I happened to like them even more since I am a scholar, and can appreciate the dialogue heavy socio/political/religious content. Some of the dialogue is kinda bad, but the other great stuff makes up for it. So yeah, this version is heavily flawed, but I still enjoyed it. When it comes to epic film making, Ridley Scott is a modern master.