King Richard and the Crusaders (1954) 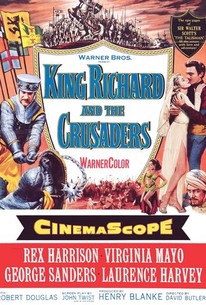 Roundly panned when it was first released, this CinemaScope film version of Sir Walter Scott's The Talisman can now be enjoyed on a "high camp" level. George Sanders plays King Richard the Lionhearted, while his arch-foe Saladin is over-acted by Rex Harrison. One of Richard's objectives during the Crusades is to reclaim the Holy Grail from Saladin's Mohammedan hordes. On the home front, Richard must contend with a group of conspirators dedicated to toppling him from his throne. In the middle of all this is the fictional Lady Edith,a British noblewoman played by Virginia Mayo in a manner that can best be described as overbaked. It is Ms. Mayo who delivers the film's classic line "Oh, fight, fight, fight! That's all you ever think of, Dickie Plantagenet!" In his American film debut, Laurence Harvey is as hammy as the rest of the cast as Sir Kenneth, Richard's right-hand man.

George Sanders
as King Richard I

Lester Matthews
as Archbishop of Tyre

Critic Reviews for King Richard and the Crusaders

Sharp widescreen photography and clever use of stereophonic sound help to atone for the frenzied music and some silly overacting in a CinemaScope item adapted from Sir Walter Scott's novel.

Enjoyable as a fluff pic on the Third Crusade.

Audience Reviews for King Richard and the Crusaders

At times laughable Crusades drama. Harvey and Virginia Mayo in particular seem to be playing to the back balcony. Beautiful color and high production values help but this is definitely not a lost classic.

King Richard and the Crusaders Quotes