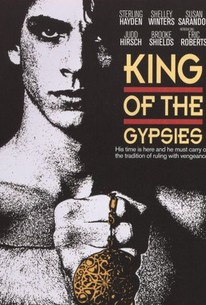 Not surprisingly, this fascinating dissection of Gypsy life in America was vilified by several ethnic special-interest groups, who'd previously delivered their mimeoed missives to novelist Peter Maas, on whose book the film was based. Sterling Hayden is the "king" of a New York-based gypsy tribe, who on his deathbed passes his crown to his reluctant grandson, Eric Roberts. Roberts' scuzzy father Judd Hirsch, envious that he's been passed over, begins plotting the demise of his own son. It appears at first that the boy, a thoroughly assimilated Manhattanite, would be more than willing to give up his invisible throne to Hirsch, but there's something about his heritage that always draws him back to his own people. Several genuine gypsies took part in the film as extras, bit players and technical advisers; reportedly, they also spent much of the shooting time trying to cadge a few dishonest dollars from cast and crew.

Harris Laskawy
as Man at Accident

Harris Laskaway
as Man at Accident

Tom Mason
as Policeman at Groffo's Death
View All

Critic Reviews for King of the Gypsies

King of the Gypsies is a fine wedding of craft and creativity.

Audience Reviews for King of the Gypsies

An all-star cast for a boring drama, which fails to bring an interesting subject to life. This movie could have been good, I could tell, but something was holding it back, I'm not sure what, maybe it was the director?

King of the Gypsies Quotes