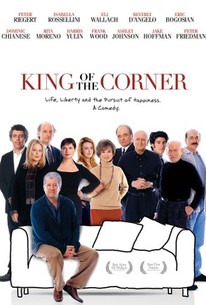 King of the Corner Photos

A man looking for a new purpose in his life finds one that last place he expected in this comedy. Leo Spivak (Peter Riegert) is a man slowly sinking into the quicksand of a midlife crisis. He's become increasingly unsatisfied with his career in product testing, especially now that his young assistant Ed (Jake Hoffman) has taken to stealing his ideas and passing them on to his boss as his own work. Leo's marriage to Rachel (Isabella Rossellini) is not what it once was, especially now that she's shifted into a constant state of near-hysteria over their daughter, Elena (Ashley Johnson), and her budding romance with an aspiring juvenile delinquent. And Leo is spending every other weekend with his aging father, Sol (Eli Wallach), who has lost his will to live but uncooperatively won't die. As Leo puzzles over his path in life, he finds some very unexpected answers when he makes the acquaintance of Evelyn Fink (Eric Bogosian), a "freelance Rabbi" with some unusual spiritual advice. King of the Corner was directed and co-written by leading man Riegert; the screenplay was adapted from stories in the collection Bad Jews by Gerald Shapiro.

Critic Reviews for King of the Corner

As a portrait of an average guy who makes average mistakes, it conveys wit and wisdom without leaning too heavily on schmaltz.

Although it's not a flashy debut, Riegert demonstrates an unfailing generosity toward his fellow actors that takes him far.

It's a warm, unexpectedly moving portrait of a man on the verge of what could either be a dreadful or delightful second chapter.

This is perilously close to a vanity film, but since the star has always seemed like one of the least vain guys in the business, maybe he deserves to go on a bender.

Although Riegert, who has here assembled a first-rate cast, clearly has a good touch with actors, his handling of the awkward material reveals his directorial inexperience.

Mr. Riegert has assembled a capable cast with too little to do or say in this dry, crumbly, barely nourishing tale of intergenerational woe.

A story of maturity and consequences -- teens OK

A punishing but also compassionate spotlight on a New York City corporate marketeer, and the result is really the movie screen as two way mirror, warts and all.

A pleasant comedy with plenty of heart and a cast that makes it worth the price of admission.

We've seen the midlife-crisis comedy a hundred times before, but the smarts and the gentle wit of this one makes it a standout of the genre.

perfectly average in almost every way.

A labor of love film where you feel love much stronger than you feel the film.

Audience Reviews for King of the Corner

There are no featured audience reviews yet. Click the link below to see what others say about King of the Corner!

King of the Corner Quotes