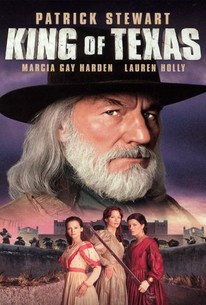 Shakespeare's tragedy +King Lear is transplanted to 19th century Texas in this made-for-cable drama. Patrick Stewart stars as John Lear, the wealthiest and most powerful rancher in the territory. Failing in body and mind, Lear decides to divide his vast property among his three daughters -- Suzannah (Marcia Gay Harden), Rebecca (Lauren Holly), and Claudia (Julie Cox) -- giving the most land to the girl who most persuasively professes her love and loyalty. While her mercenary sisters fawn all over John, the headstrong Claudia refuses to feed false compliments to her father, and as a result, she is banished from his ranch. But when Lear's spread is threatened by usurpers and landgrabbers, the enfeebled patriarch realizes that Claudia is the only one of his offspring truly worthy of his affection. All of the Shakespearean highlights are intact, albeit retranslated within the genre expectations of the Western. For example, Lear's blinding is done with a branding iron. An uneasy mixture of British theatricality and John Ford-like cinematic spectacle, King of Texas (filmed in Mexico despite its title) originally aired June 2, 2002, on the TNT cable network.

Memo Escobedo
as Cowboy
View All

Critic Reviews for King of Texas

Not even some south-of-the-border Yankee imperialism can save this from howling effrontery.

Fine enough fare for Shakespeare junkies who aren't too hard core about their history.

Does not attain the catharsis of the great tragedy it uses as its model, but manages to deliver only melodrama.

Audience Reviews for King of Texas

A bit boring. Didn't hold my attention all the way, but it was alright to watch.