The King of Marvin Gardens1972 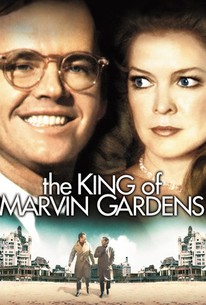 The King of Marvin Gardens Photos

Dreams die hard in wintry Atlantic City in Bob Rafelson's downbeat character drama. Depressive deejay David Staebler (Jack Nicholson) tends to his grandfather as he philosophizes on late-night Philadelphia talk radio. When his huckster older brother Jason (Bruce Dern) calls out of the blue one day, David travels to Atlantic City to see what his latest easy money scheme is. Along with his former beauty queen companion Sally (Ellen Burstyn) and her pretty stepdaughter Jessica (Julia Anne Robinson), Jason plans to open a resort on a small Hawaiian island, insisting to an initially skeptical David that the deal is as good as done. David plays along but, as he learns the reality of the situation, tries to talk some sense into Jason. Jason and his women will have none of it, leading to a tragic lesson about the cost of superficial values like beauty and wealth, and the limits of brotherly love. Rafelson's follow-up to his 1970 hit Five Easy Pieces once again questions American myths of success, with one brother unwilling to come to earth to realize his dreams and the other unable to do much beyond talk about his inertia to an unseen radio audience. With Five Easy Pieces star Nicholson as the introverted lead, and impressive cinematography by Laszlo Kovacs, The King of Marvin Gardens had the makings of another Hollywood New Wave hit. The response, however, was not what stumbling BBS Productions hoped, as Columbia barely supported the film and 1972 audiences were not as responsive to Rafelson's second exploration of contemporary alienation. The King of Marvin Gardens' artful depiction of disillusionment roots it firmly in the 1970s Hollywood art cinema, and its failure became one more sign of that cycle's popular limits.

Wyetta Turner
as Dancer
View All

Critic Reviews for The King of Marvin Gardens

A cult classic about fading dreams that has curiously improved with age.

The wintry Atlantic City is brilliantly evoked; the firecracker dialogue is a joy, and the final, chaotic denouement is genuinely unexpected.

[A] taxingly morose, intermittently interesting reunion between the director and star of the tremendous Five Easy Pieces.

Introspective and self-conscious, it's a chill offering that struggles to find its own voice.

Admirers of director Bob Rafelson's previous feature, Five Easy Pieces, will be stunned by the tedious pretensions of his newest effort.

The film is talky and often abrasive, but it sticks in the mind.

There hasn't been a more enveloping, more desolating - or for that matter funnier - put down of America in years.

The film is well worth seeing, but the real attraction is the stunning depiction of Atlantic City.

A flawed masterpiece full of menace, surreal moments and obscure dialogues, with the city photographed in all its desolate, decaying beauty ...

Criminally underrated with two great performances from the lead males.

Audience Reviews for The King of Marvin Gardens

Ellen Burstyn is crazy (as usual)

Easily one of the most overlooked movies of the 70s. This has such a brave finale that completely changes the entire plot, character motives and mood of the movie. Bob Rafelson takes a story about two estranged brothers and turns it into something so much more engaging and memorable. Knowing Jack Nicolson, it's almost bizarre not to see him have multiple freak outs in a movie, especially during his 70s era of acting. He plays a really introspective and reserved character that honestly ends up being just as admirable as his more famous ones. Who really does end up completely dominating the movie is a completely unsuspecting Ellen Burstyn. When you think of character development, there is no better example than her in this movie. To see her go from a seemingly jolly and upbeat person into a train wreck of doom is an event you can't miss. This has all the great cinematography and direction that Bob Rafelson had with Five Easy Pieces, but this is a completely different take on America.

A very deep, intense, dramatic movie with a great story and brilliant actors. I loved this movie, and I highly recommend it.

The King of Marvin Gardens Quotes