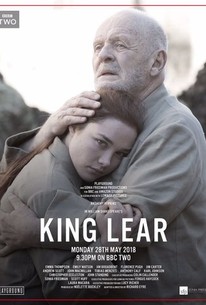 Critics Consensus: Led by dual mesmerizing performances from Sir Anthony Hopkins and Emma Thompson and rounded out by a solidly stocked ensemble, this King Lear is a highly watchable adaptation.

Critics Consensus: Led by dual mesmerizing performances from Sir Anthony Hopkins and Emma Thompson and rounded out by a solidly stocked ensemble, this King Lear is a highly watchable adaptation.

Critic Consensus: Led by dual mesmerizing performances from Sir Anthony Hopkins and Emma Thompson and rounded out by a solidly stocked ensemble, this King Lear is a highly watchable adaptation.

The 80-year-old King Lear divides his kingdom among his daughters, Goneril, Regan and Cordelia, according to their affection for him. Cordelia refuses to flatter him, so he banishes her. Having acquired power, Goneril and Regan expel their father from their homes. At the same time, Lear's prime minister, Gloucester, is betrayed by his son Edmund and his other son, Edgar, is forced to go into hiding.

Jim Broadbent
as Earl of Gloucester

Jim Carter
as Earl of Kent

Tobias Menzies
as Duke of Cornwall

Anthony Calf
as Duke of Albany

Christopher Eccleston
as Oswald
View All

Yet the film is such a cracking good entertainment I barely even noticed that its world makes no sense.

It's as political a production as it needs to be, and at its best, it feels as current and as timeless as a nightmare.

The performances hold it together; this play has always been focused on human suffering. Amazon's King Lear is by no means a definitive adaptation of what is arguably the Bard's finest tragedy, but it is a thrilling and entertaining one.

While the language of Shakespeare can be a challenge for the modern viewer, this "King Lear" is so physical and the acting so expressive that one is never unsure of what is happening, or what devilment.

Just because nobody could or should feel this is a definitive King Lear detracts only somewhat from the undeniable joy that comes from even two hours of watching Anthony Hopkins gnash his teeth, wail and go gloriously mad.

Now 80 himself, the right age, Hopkins is at home in Lear's skin. Shouty, angry, cruel one moment; vulnerable, tender, loving the next - or at the same time. A mesmerising performance.

And naturally, with Hopkins on board, the rest of the cast was pretty terrific as well - to the point of unexpectedly turning King Lear into something of an ensemble piece.

Any Lear with Hopkins is a good Lear, and while this version may be thinner than most, it's still got all the moments one would wish for.

A simple, accessible version of one of Shakespeare's best.

The whole cast - top-notch - takes Anthony Hopkins' lead and chews the scenery down to gristle and bone.

In short, Eyre's style is a superb way to approach the Bard in the age of the Shard.

What a story! Well done, Will. Fantastic imagery and art direction, but a little heavy and a tad wearing, the film's chock-a-block with interesting British actors.

Anne Brodie
What She Said
View All Critic Reviews (22)

Even with a great cast I think this adaptation falls prey to one of the greatest dangers with "King Lear" . . . getting lost in the plot when its the characters and their own little misadventures that should be the real focus. If the Fool isn't memorable, you've gone astray.