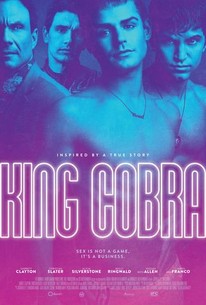 Jack Reacher: Never Go Back Probably Shouldn’t Have Gone Back

Though based on a true story, it's presented with none of a docudrama's ragged, lumpy oddity: the narrative is on the lean side, but as taut and burnished as the bodies it depicts.

King Cobra smells more like business plan than a movie.

Slater has some effective moments and Franco excels at a certain kind of scary/funny psycho, but it doesn't ultimately add up to much as either pulpy trash or exposé.

King Cobra is a cut above most homoerotic masturbatory screen fantasies, but not by much.

The unique setting aside, there's just not much to sink your fangs into.

The film is critical of how we allow the buying and selling of people, all culminating in the shocking real events that the story illustrates so vivid.

King Cobra takes an interesting true crime and covers it in exploitative sex, pedophilic overtures and acting that would make a high school drama teacher cringe.

Slater and Franco are compelling in their roles, but King Cobra's jarring use of humor overly blurs the line between drama and satire while leaving a lot left unpacked.

There were some structural issues that effected characterization, but ultimately this captured a certain mood and tone that seems real.

Christian Slater is really good and compensates for some poor performances by other actors (especially Alicia Silverstone), and the film uses an interesting structure (based on clever parallels) to develop its characters in a way that lets us grasp their motivations.

THE UNION OF THE SNAKES - My Review of KING COBRA (3 1/2 Stars) James Franco, the busiest (Over) Actor in the business has another one for you, and like so many of his others, it's salacious, lurid, often over-the-top, and GAY, GAY, GAY! Fairly shallow but always entertaining, KING COBRA tells the ripped-from-the-headlines true story of the battle to represent gay porn star Brent Corrigan (real name Sean Lockhart) and the resulting murder of one of those involved. Writer/Director Justin Kelly (I AM MICHAEL) has created an intimate psycho-drama here, and your enjoyment of it depends entirely on your ability to accept audaciousness and silliness concurrently. For me, I had a pulpy good time. The performances are mostly terrific. Despite some very limited screen time, I loved seeing Alicia Silverstone and Molly Ringwald back in action. In fact, when Silverstone first appears, she says to Corrigan, her son, "It's so great to see you again!", and I thought to myself, "It's so great to see you again too, Alicia!" A victim of underwriting and under-lighting, Ringwald appears almost unrecognizable in her two scenes as Stephen's worried sister. Moreover, the film captures a touching feeling of loneliness and that frantic feeling that you just might not have enough money to live. Popcorn for everyone, right? Well actually, yes. As long as you don't take the film too seriously, it's a small, creepy look at two trains hurtling towards each other, and you spend most of the running time waiting for that big crash. Played with a slightly smarmy confidence by Garrett Clayton, best known as a Disney kid from TEEN BEACH MOVIE and about to appear in HAIRSPRAY LIVE, he captures the attention of Stephen (Christian Slater), a lonely, closeted, insecure film producer who sees dollar bills in his young charge. It's the early 2000's and porn has found a cozy spot on the internet. Stephen takes Sean into his home, becomes his sexual and business partner, but Stephen maintains ownership of the name, Brent Corrigan. The relationship works for a while and Stephen is raking in cash. Being a rising star, Corrigan wants a much bigger piece of the pie. Being a controlling producer, Stephen doesn't want to pay Corrigan what he's worth. Meanwhile, a rival company headed by Franco's Joe takes note of Corrigan's fame and wants to lure him his way. Unfortunately, Joe is a completely unhinged psychopath who has his own young budding porn star Harlow (Keegan Allen of PRETTY LITTLE LIARS) under his wing. Harlow and Joe, like Stephen and Sean, are a couple, but instead of confidence and financial success, they exude desperation, trauma, and a will to do anything to get ahead. Good things can't come about when these two stories intersect, especially when Stephen has no intention of letting anyone else use Corrigan's famous name in any other productions but his. Franco, in full SPRING BREAKERS mode, yells most of his lines, which tends to grate after a while. I did, however, enjoy watching him and Harlow working out while screaming their success mantra, "No little bitches!" over and over. It's exactly what I imagine every narcissistic sociopathic climber to scream instead of, say, "Namaste". Suddenly, this small town movie started to feel a lot like Hollywood! Like a lot of Franco's output of late, he's more interested in shaking up the status quo with his insane antics than he is in delivering a performance of any sort of subtlety and nuance. Fortunately, Slater steps right in and delivers a sad, touching portrayal of a complicated man who covets his star but fails to recognize the contributions he has made to his own success. Clayton's Corrigan is a bit of a blank, but I enjoyed the twinkle in his eye as he starts to recognize his power. Keegan, though playing a dimwitted child, effectively navigates the troubled past of his character, making his actions all the more believable. I'm not entirely sure what KING COBRA has to say. It's got a bit of "This is America! Go for your dreams!" quality but it's surrounding by themes of greed, violence, and the lure of young flesh. For a film about porn, the sex scenes are either surprisingly tame or too ridiculously loud and overly zealous (I'm talking to you, Franco!), and the final line of the film, while meant to sound heroic, is right up there with the best lines from SHOWGIRLS. You'll know it when you hear it. It doesn't matter. I keyed right into the goofy rhythms of this film and found minor pleasures in watching people do crazy things for money.