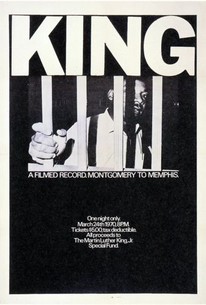 King: A Filmed Record...from Montgomery to Memphis is the landmark documentary that chronicles the life and work of Dr. Martin Luther King, Jr., from the beginnings of the Civil Rights movement in Montgomery, Alabama, and culminating with his assassination in Memphis in 1968. Originally screened in theaters for only a single night in 1970, King: A Filmed Record combines dramatic readings by Harry Belafonte, James Earl Jones and Paul Newman, among others, with newsreel and archival footage to create a powerful and comprehensive record of Dr. King's legacy and the American Civil Rights movement. King: A Filmed Record is an indispensable primary resource of a pivotal moment in American and world history.

Critic Reviews for King: A Filmed Record...Montgomery to Memphis

A timeless tribute to a selfless martyr who led his people to the Promised Land by holding fast to his fervent faith that their willingness to endure suffering along the way would exceed their enemies' capacity to inflict suffering.

Worth it alone for Nina Simone's haunting rendition of Why (The King of Love Is Dead), heard as Dr. King's mule-drawn casket led over 100,000 silent mourners from Ebenezer Baptist Church on a 3 1/2 walk through the streets of Atlanta.

There are no featured reviews for King: A Filmed Record...Montgomery to Memphis at this time.