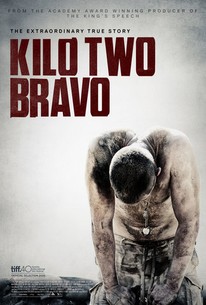 Critics Consensus: Kilo Two Bravo honors its fact-based story with an almost unbearably tense drama that captures the horrors -- and the human cost -- of modern warfare.

Critics Consensus: Kilo Two Bravo honors its fact-based story with an almost unbearably tense drama that captures the horrors -- and the human cost -- of modern warfare.

Critic Consensus: Kilo Two Bravo honors its fact-based story with an almost unbearably tense drama that captures the horrors -- and the human cost -- of modern warfare.

KILO TWO BRAVO relives the true story of a platoon tasked with neutralizing a Taliban roadblock in the Kajaki region of Afghanistan. As they close in on the insurgents, the unit find themselves marooned in the middle of an active minefield, setting in motion a desperate air rescue mission that risks detonating the entire explosive terrain. This excruciatingly tense thriller depicts the heroism, courage, and survival of the brothers of Kilo Two Bravo company and tells the story of one of the most valiant rescue efforts of modern warfare.

Kilo Two Bravo is one of the most intense anti-war films extant.

Mines detonate, the men hold on, the humour is the gallows' kind and the audience's gut is as tight as the tourniquets on the hurt soldiers' stumps.

An intimate, unforgettable examination of war.

Few war films are entertaining in a traditional sense. This one is so relentless that recoiling from it is nearly impossible.

Once the men are on the riverbed facing a painful death, [director] Katis and screenwriter Tom Williams wind up the suspense to the point where even a rock cascading down a hill will have you holding your breath, waiting for the next bomb to detonate.

It's a relief that one can report that, strictly in aesthetic terms, it is indeed a well-made piece of work, executed with better-than-average levels of craftsmanship.

By casting unknowns, Katis only ratchets up the tension more, leaving his audiences breathless throughout, unable to second guess who might make it out alive.

An arguably anti-war depiction of true events, yet one that expertly eschews the mawkish or sanctimonious didacticism such films frequently espouse.

... more focused on character-driven moments than elaborate battlefield conflicts, yet it ratchets up the tension effectively.

The cast are fully believable, and the landscape - Jordan filling in for Afghanistan, as it did for Saudi Arabia in the recent release Theeb - provides another character, implacable and indifferent. War may be hell, but hell can be starkly beautiful too.

While hardly a fun time at the movies, Kilo Two Bravo is a fine piece by first-time feature director Paul Katis.

Katis has crafted one of the most unbearably tensioned filled film I have ever seen. I was glued to the screen for the entire film, the script and characters are amazing, but the filmmaking is what really captures the acclaim. The film and the characters are shown respect and you feel like all the choices are true to the real life characters. Katis had the task of trapping the audience to the single location for the duration of the film and he doesn't fail with this task. This seems to have missed the core audience but word of mouth has been kind to this film and I have since pushed others to watch this film. Powerful filmmaking and one of the most engaging war films I have seen for quite some time. 10-03-2018.

An acceptable war film depicting the plight of soldiers who are stuck in a mine infested part of Afghanistan. Missing something though.