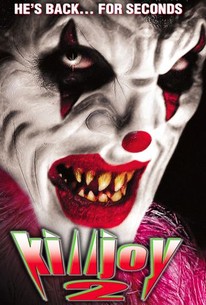 Director Tammi Sutton's superior sequel to Craig Ross' dismal urban clown shocker Killjoy marks both an improvement over the original (on one-fifth of the budget) and the introduction of almost a completely new character, as Trent Haaga's portrayal of the titular bogeymen rises head and shoulders above that of Angel Vargas in the first film. A pair of juvenile detention officers and their streetwise charges head for the wilderness as part of an Outward Bound-type program, only to run into horror and death. Genre enthusiasts will recall the same set-up being used in Tony Randel's 1994 mutant-bug film Ticks, but it still seems fresh here due to both the subject matter and the relative paucity of horror films dealing with ethnic urban youths in the intervening years (the cast is almost exclusively African-American). After a shooting death and conflicts with the obligatory redneck (Sutton), the kids hole up in the home of an elderly voodoo practitioner (Rhonda Claerbaut), only to be menaced by Killjoy. Cult favorite Debbie Rochon co-stars in this entertaining horror film, which was extensively re-edited prior to release by executive producer J.R. Bookwalter to tighten up what he felt was a rather slow initial cut.

Bobby Marsden
as Off. Chris White

Killjoy 2 signaled the start of a whitewashing trend in this franchise that would see each successive film feature less and less of a black presence (and more and more corny attempts at humor that fall flat).

There are no featured audience reviews yet. Click the link below to see what others say about Killjoy 2: Deliverance from Evil!