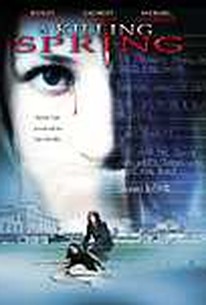 Originally telecast over Canada's CTV network on January 29, 2002, A Killing Spring was a one-shot attempt to revive the popular Joanne Kilbourn Mysteries series (aka Criminal Instincts), starring Wendy Crewson as the ex-police-detective-turned-university-lecturer created by Gail Bowen. Missing from this feature-length whodunit is Joanne Kilbourn's longtime co-star Victor Garber, though Shane Doyle fills in admirably as the "official" representative of the law. In this one, Joanne Kilbourn returns to Lanholm College, where she had once been a professor, when the Dean of Journalism is found dead, evidently the result of autoerotic suffocation during "rough sex." Although she risks losing an important internship, Joanne insists upon investigating the death, and in the process unearths a hotbed of moral depravity and academic backstabbing. Throughout, there is one person who is willing to commit murder rather than allow Joanne to expose his innumerable peccadillos -- and the result, inevitably, is two additional corpses. In the United States, A Killing Spring was picked up by the Lifetime cable channel. ~ Hal Erickson, Rovi

Pamela Wallis
as Herself
View All

Critic Reviews for A Killing Spring

A Killing Spring is no worse than the...melodra-mysteries that Lifetime passes off every day as presentable female pastimes in easy to forget two-hour segments.

...it's impossible not to get a kick out of watching former Home Improvement kid Zachary Ty Bryan acting like a punk.

There are no featured reviews for A Killing Spring at this time.