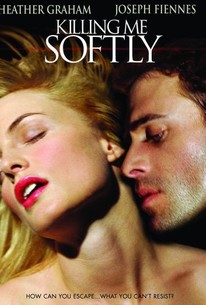 The director of such highly regarded films as Yellow Earth (1984) and Farewell, My Concubine (1993), Chinese filmmaker Chen Kaige makes his English-language debut with this erotic thriller adapted from the novel by Nicci French. Alice (Heather Graham) is an American Web designer living in Illinois who falls for a ruggedly handsome mountain climber named Adam (Joseph Fiennes). Bored with her dull love live, sparks begin to fly when Alice and Adam have a chance meeting at a stoplight, and it isn't long before the couple are living together and Adam proposes. With their heated romance taking on hints of mild S & M following their wedding, Alice's realization that she knows very little about her new spouse begins to take on ominous undertones when she discovers that his former fiancée died under mysterious circumstances. Allegations of rape and more missing lovers soon prompt Alice to continue her increasingly disturbing investigation toward answers she may not be ready to accept.

Critic Reviews for Killing Me Softly

As Graham attempts to uncover the truth about his past, the film grows increasingly convoluted, leading to a twist ending that will come as a surprise only to those who've never seen a Shannon Tweed movie.

Inane and shopworn material with a truly cheesy final twist, this is made excruciating by direction that takes it all deadly seriously.

Turkeys don't come plumper than this.

What a great shame that such a talented director as Chen Kaige has chosen to make his English-language debut with a film so poorly plotted and scripted.

With miscast leads, banal dialogue and an absurdly overblown climax, Killing Me Softly belongs firmly in the so-bad-it's-good camp.

Killing Me Softly lingers under the delusion that it's Hitchcock remade for a more permissive era, rather than Cinemax fare with pretensions to art.

The screenplay (based on Nicci French's novel) is cringeworthy, and Kaige's inability to spot when English-speaking thesps are reciting rather than acting produces scenes that vary from lifeless to laughable.

Why, you might ask, is master director Chen Kaige wasting his time on such trashy material?

What a disappointing waste of good talent!

A hilariously bad movie that has to be seen to be believed.

It's pretty campy-silly, but it's surprisingly watchable for some reason, maybe because of the name-brand actors sleazing it in this Skinemax would-be classic.

Audience Reviews for Killing Me Softly

Heather Graham and Joseph Fiennes star in the erotic psychological thriller Killing Me Softly. Based on a bestselling novel, a woman has a chance encounter with a mountain climber that leads to a passionate affair, but before long she starts to receive mysterious letters warning her that her lover is not the man that she thinks he is. Graham and Fiennes have no chemistry together, which is detrimental to the film. And the script does a rather poor job at developing the mystery and suspense; so much so that the twists and reveals have no impact. Still, there's some intrigue to the story, and a few tense moments here and there. A poorly made film, Killing Me Softly is ineffectual and formulaic.

Utter trash but I somehow managed to gte through this because I focussed on how lovely Joesph Fiennes looks in this film ^_^ However, it's poorly directed, acted, written..the list is endless. Would recomend this is Joesh Fiennes films but besides that avoid it at all costs. Just terrible.

Well, I had to review this film like this, whether the plot was the most sophisticated thriller, or whether the love scenes were copied from another film it was beside the point. Every woman would like to meet a man like Joseph Fiennes' character and be swept off her feet and have great sex and all the attention in the world. I think most of those who did not like the film must be men cause they know, they' don't have the guts to be a man like that... ( i m kidding) well, I recommend this film as a truly romantic love story and the kinky sex was also not the point of the story. Girls, u will really love this film and Joseph Fiennes is, of course wonderfully gorgeous and convincing and lovable in every scene, and Heather Graham was beautiful. The wedding night idea was absolutely brilliant. ( hi hi )

This is an interesting movie with Heather Graham and Joseph Fiennes. A bit on the surprising side, but the story plot was intriguing.