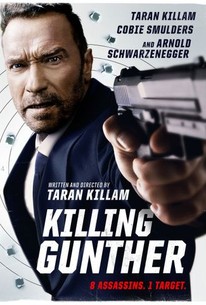 Critics Consensus: Despite a game cast led by an enjoyably over the top Arnold Schwarzenegger, Killing Gunther feels like a sketch overstretched to feature length.

Critics Consensus: Despite a game cast led by an enjoyably over the top Arnold Schwarzenegger, Killing Gunther feels like a sketch overstretched to feature length.

Critic Consensus: Despite a game cast led by an enjoyably over the top Arnold Schwarzenegger, Killing Gunther feels like a sketch overstretched to feature length.

A comedy set in the world of contract killers. A group of young, raw and undisciplined assassins hire a docu-crew at gun point, to have undeniable proof that they're the ones who will kill the most infamous hitman of all time, Gunther. But Gunther is on to them before they know it and he makes it his personal mission to make their lives a living hell. It becomes a race against time: kill or be killed, as the hunters quickly become the prey.

Allison Tolman
as Mia
View All

Only the Brave Is a Powerful Tribute

Schwarzenegger has a great time hamming it up, and we have almost as much fun watching him have fun.

More than anything, Killing Gunther demonstrates that Christopher Guest has a lot to atone for with his pioneering of the mockumentary, which has become the lazy, go-to style for low-budget comedies.

All anybody's expecting is rapid-fire absurdities and Three Stooges violence, which Killam serves up aplenty.

Although the production is sporadically amusing, it feels like a 20-minute short that was expanded to feature length to its considerable detriment.

It's little more than a diverting sketch, but its characters justify its ninety minutes, and Killam's unremitting enthusiasm is occasionally contagious.

Schwarzenegger's presence should have given for an infinitely more solid parody. [Full Review in Spanish]

A cautionary tale about the modern assumption one can achieve fame through a single act rather than putting the work in, the amiable if messy Killing Gunther is saved by Schwarzenegger's exuberant portrayal of the World's Top Assassin (yes, another one!)

There are few things more cinematically painful than watching a cast work really hard to make you laugh and fail with consistency. That's the experience that Killing Gunther offers, and it is a rough watch.

Too smart for the 'wacky comedy' box and too outrageously playful to sit alongside standard action fare, Killing Gunther is nevertheless destined to find an audience who will watch it again and again.

Your mileage will likely come down to your fondness for the sorts of hitman action movies that are being sent up.

I liked this movie more than I thought but at the same time I felt a little cheated too, As the only reason I wanted to see this movie was because I'm a huge Arnie fan and if he wasn't in it I wouldn't of bothered, But we don't even see him until the final act, The film was good though as a group of hitmen document themselves trying to take out Gunther the best hitman in the world, It's full of some fun twists and turns, Some pretty fun action and it's got some great humour that worked more than it should of, The movie gets turned in its head when Arnie comes into it but it worked well even if it did get silly in places, Apart from having some dodgy effects and being mislead by the trailer, Killing Gunther was a good unique film that is worth a watch.

That's a damn fine poster you've got there, Killing Gunther. Unfortunately, it's also indicative of Killing Gunther's biggest problem: Leading the promotional material with Arnold Schwarzenegger. I know, from a marketing standpoint, it makes a hundred and five percent sense, totally get it. But purely in terms of the experience you go through from watching a movie, I feel absolutely certain that Killing Gunther would have been exponentially better if Arnie's involvement was kept secret. It seems very much as if the movie was built that way, and then the direction was changed some time after post-production. In the end, Killing Gunther is an okay movie, but it might have been *great* if the Gunther character was a genuine reveal in the film, instead of the "Fuckin' finally" moment we ended up with.

Stealing tone from What We Do In The Shadows, this mockumentary's gist is what hilarity might ensue when incompetents try to kill the best hitman in the world. The answer: none. I hope they had fun filming it. How bad is it? When Arnold hadn't showed up by the last third of the movie I began to hope he wouldn't.