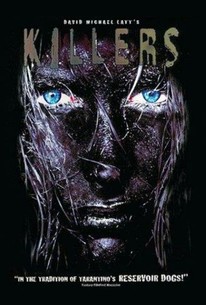 When a drug deal goes bad, several semi-innocent bystanders must fight for survival in the suspense thriller Killers. Ray (Christopher Maleki) is the leader of a group of bikers looking to make some fast money. They think they may have found the opportunity of a lifetime when a drug dealer named Speed (Frankie Ray) offers Ray a cache of drugs at a bargain price. However, what Ray doesn't know is that Speed stole the stash from Dan (Scott Carson), whose father is a major drug dealer. Dan is hoping to move into the big leagues of illegal chemicals himself, and isn't about to let anyone rip him off; as Ray and Speed are making the trade-off in an abandoned warehouse, a group of hired killers working for Dan roll up and begin making short work of Ray and Speed's respective crews. Heather (Kim Little), Ray's girlfriend who tagged along for the ride, is a rich girl from Beverly Hills who likes slumming with "bad boys" like Ray, but when the drug deal turns into a bloodbath, she realizes she's gotten herself in far too deep. Dan's men are determined to wipe out anyone who was involved in the sale or saw the execution; before long, Heather is being hunted like an animal, and she realizes if she wants to survive, she must become a killer like the men who are chasing her. Killers won the Best Picture/Bronze Award at England's 1998 Festival Of Fantastic Films, and appeared at several other genre film festivals that same year.

[It's a] violent, high-energy U.S. action film, in the Hong Kong tradition.

There are no featured audience reviews yet. Click the link below to see what others say about Killers!