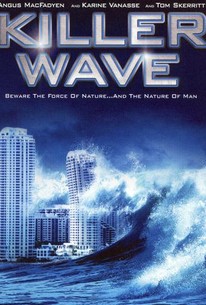 A series of massive tidal waves decimate the entire East Coast, leading a renegade expert on man made ecological disasters and weapons of mass destruction to suspect that a force far more human than Mother Nature is at work in this terrifying mini-series starring Angus Macfayden, Tom Skerritt, and Karin Vanasse. The first wave hit the East Coast without warning, with subsequent tsunamis following in quick succession. Before long towns all along the coast have been destroyed, and scientists are at a loss to explain just where these gigantic waves originated. When top scientists fail to find a conventional explanation for the waves, renegade ecological expert John McAdams (Macfayden) is called upon to offer a hypothesis. Upon consulting with Oceanographic Institute genius Sophie Marleau (Vanasse), McAdams begins to suspect that the waves are man made disasters specifically designed to keep the population in check. After McAdams makes his suspicions public, another scientist attempts to uncover who is behind the conspiracy and is promptly murdered - leaving McAdams as the prime suspect in the killing. Later, McAdams discovers the true identity of the terrorist whose sub-aquatic nuclear missiles are holding an entire country in fear. But as the earth begins to quake and the seas begin to swell once again, it may already be too late to stop the latest attack.

There are no critic reviews yet for Killer Wave. Keep checking Rotten Tomatoes for updates!

There are no featured audience reviews yet. Click the link below to see what others say about Killer Wave!