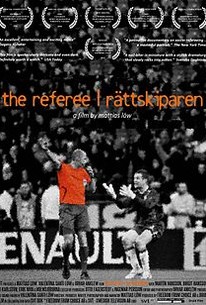 Featuring infamous referees Pierluigi Collina and Howard Webb, who provoked controversy after his performance at the 2010 World Cup Final, THE REFEREES exposes fans to a new dimension of the beautiful game. For the first time, filmmakers have been given unfettered access to go behind the scenes at an International tournament, following the refereeing teams on and off the pitch as they compete for the prize to referee the final. Revealing the micâ(TM)ed conversations between referees, players and their assistants, this film delves into the refereesâ(TM) world as they face abuse from managers, death threats from fans and their every decision to be scrutinized around the world.

If you've ever wondered how international referees deal with spoilt millionaires who play football and then Twitter their disgust at their decisions, watch this movie.

In its depiction of loneliness, The Referees slightly resembles the Channel Four TV documentary Graham Taylor: The Impossible Job, from 1994.

Set during the 2008 European Football Championship, it takes advantage of privileged, UEFA-backed access to portray referees' intense, pressurised lives both on and off the field.

Merely a collage of snippets that hint at a more interesting and focussed narrative buried somewhere in the middle.

Even for footy fans, the film's a game of guesswork.

What gives Les Arbitres an edge is that we can hear the dialogue between the referee and the players in the heat of battle.

It's a sober film, and impressionistic rather than analytical, with no commentary and no direct identification of teams, speakers or venues.

The picture provides a compelling insight into the mindset required to be one of the "men in black": tough, masochistic and deeply vain.

Films like this stand or fall on their characters and while Webb keeps us watching, he's not featured often enough.

The lives of football referees and linesmen have always been a bit of a mystery, but this fine, no-frills documentary provides some long-overdue insight.

Eschewing voice-over, director Yves Hinant spotlights the reality of an occupation where an unpopular call can result in death threats.

Impressively directed documentary that takes an intriguing look at a little-seen aspect of football, both behind the scenes and on the pitch.

There are no featured reviews for Kill The Referee (les Arbitres) at this time.