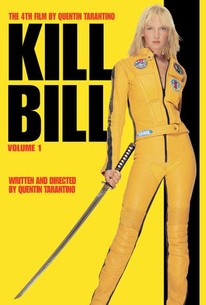 Critics Consensus: Kill Bill is admittedly little more than a stylish revenge thriller -- albeit one that benefits from a wildly inventive surfeit of style.

Critics Consensus: Kill Bill is admittedly little more than a stylish revenge thriller -- albeit one that benefits from a wildly inventive surfeit of style.

Critic Consensus: Kill Bill is admittedly little more than a stylish revenge thriller -- albeit one that benefits from a wildly inventive surfeit of style.

An entire wedding party is slaughtered during a dress rehearsal in a rural chapel: the pregnant woman in the blood-splattered wedding dress is Black Mamba, better known as The Bride. The assassin, Bill, and his circle known as The Vipers left The Bride for dead, but unluckily for them she was merely comatose. Four years later, The Bride suddenly awakens from her coma and realizes what has been done to her. She sets off on a ferociously focused mission, setting out to seek revenge on her former master and his deadly squad of assassins. One by one, she kills the various members of the assassin group. She saves Bill for last.

A strange, fun and densely textured work that gets better as it goes along.

Even more gory and adolescent than its models, which explains both the fun and the unpleasantness of this globe-trotting romp.

It's all bang, bang; no kiss, kiss. But this is still bravura film-making from a prodigious talent, and Thurman may yet prove its saving grace.

There is no ironic overlay in Tarantino's movies, no 'commenting' on the pop schlock he's replicating. He simply wants to remake in his own way the kinds of movies he's always loved, and he's about as uncynical as a movie geek can be.

Brutally bloody and thrillingly callous from first to last.

Six years and this is all that Quentin Tarantino can come up with?

Tarantino surpasses expectations with this stylish and exciting love letter to other classic genres, while leaving his own bloody mark on them. [Full review in Spanish]

A gleefully ultraviolent homage to the B-movie martial arts films of the 1970s. It's pure bloody pulp fiction packed into a tightly wound feature.

The better of the two Kill Bill films, and perhaps the last film where Tarantino created a tight, tense and disciplined exercise in film narrative.

Here was a filmmaker who could have easily stayed in his comfort zone of smart-alecky banter between dudes but instead chose to pare down his dialogue and flex his visual storytelling muscles.

Watching Tarantino's films-and none more than Kill Bill-is like being stuck in a room with someone who, like so many of this director's characters, can't stop talking about the really neat parts in the movies he's seen.

... Kill Bill confirms [Quentin Tarantino] as a filmmaker of astonishing invention and aplomb...

The last 45 minutes of this thing are pure cinematic heaven. The steps taken to get to this point are slightly less satisfying, but ultimately 'Kill Bill: Volume 1'' is a fitting tribute to the various action flicks of the 60's and 70's.

Kill Bill is just another piece of over-hyped fanfare with no real merits. Like many of QT's other products, there is a shock-value installed through violence which does nothing but make the film gratuitously brutal. If you remove all graphic scenes from KB you are left with a sadly inept script, bad acting and a "funky" if not cacophonous soundtrack (sound like Reservoir Dogs?). Luckily for us, QT knows Americans can remember violence much longer than great writing so he can reap his rewards. I'm not even going to compare this film to the thousands of Asian KungFu knockoffs. Everyone knows a Hollywood-produced movie will succeed if it's the first time an American audience "discovers" it (The Matrix, Jackie Chan flicks, etc -- none of which are consdiered novel by HK cinema standards).. Why can't QT make a picture with the qualities of other acclaimed directors like Kubrick, whether it's visual (2001), dialogue-driven (Paths of Glory) or both (A Clockwork Orange)? Leave the violence behind and jump on a more creditable bandwagon. 1/2 star 05-2007 (Updated)

The fight scene a the end of this movie was just amazing, The Bride versus the Crazy 88's. What a great film.