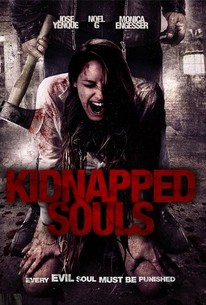 LA detectives are on the hunt for a mysterious serial killer who kidnaps and kills his victims. Their hopes of catching the killer are slim, as the detectives can't find a single shred of evidence. They finally get a break on the case when one surviving victim escapes from the killer's deadly clutches. In this chilling thriller, watch events unfold as the killer exposes the dark secrets of his victims and why he kidnaps their souls.

There are no critic reviews yet for Kidnapped Souls. Keep checking Rotten Tomatoes for updates!

There are no featured reviews for Kidnapped Souls at this time.