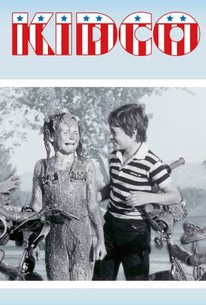 Prominently displaying red-white-and-blue title colors, this subtly patriotic fact-based movie about kids who succeed is dated by the fact that all these daring youngsters are white, without any discernible ethnicity. Dickie (Scott Schwartz) is an enterprising kid on a ranch in southern California who puts his business tendencies to practical use in several successful ventures, aided and abetted by his siblings and other friends. When Dickie & Co. become too successful, they are taken to court by their adult business rivals, but they refuse a lawyer and defend themselves. The kids win their case against their adult competitors and their lawyers, leaving the courtroom to cheers and upraised fists from a sea of youngsters outside. Three years of law school at exorbitant costs, plus a two-year internship and years of moving up a densely-runged ladder -- just to lose to an 11-year old, amazing. ~ Eleanor Mannikka, Rovi

There are no critic reviews yet for Kidco. Keep checking Rotten Tomatoes for updates!

There are no featured audience reviews yet. Click the link below to see what others say about Kidco!