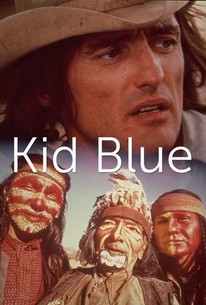 A hapless outlaw discovers he isn't any better off on the right side of the law in this offbeat western comedy set at the turn of the century. While Bickford Waner (Dennis Hopper) is known to lawmen as notorious bandit Kid Blue, his reputation far outstrips his actual success as a crook, and after a train robbery falls apart moments after it began, Bick decides it's time to go straight. Bick settles in Dime Box, Texas, a shabby little town dominated by a ceramics factory that makes novelty ashtrays, and manages to find a lose a series of odd jobs through his innate clumsiness and his short temper. Bick moves into a rooming house where he's befriended by Reese Ford (Warren Oates), a good natured man fascinated with the ancient Greeks and their ideals of male friendship, and his wife Molly (Lee Purcell), who doesn't believe their relationship need be platonic. Bick also finds a friend in pill-popping Preacher Bob (Peter Boyle) and makes an especially fierce enemy in foul-tempered sheriff "Mean John" Simpson (Ben Johnson). After his personal and professional lives take unexpected turns for the worse, Bick decides he needs to go back to a life of crime, though he hasn't gotten much better at armed robbery than he was before. Also starring Janice Rule, Ralph Waite and Clifton James, Kid Blue was shot in 1971, but not released until 1973, after the box-office failure of Dennis Hopper's The Last Movie sent his career into a tailspin; it would be his last role in an American feature until 1979's Apocalypse Now. ~ Mark Deming, Rovi

Kid Blue has a meandering jug band sensibility and a premise hilariously relevant to Hopper's situation.

Kid Blue is a well-meaning, liberal, anti-fascist Western, dressed up with some good performances by Peter Boyle, Lee Purcell and Janice Rule. But it's not a very good movie.

A gentle little fable about the mechanization of the west and its effects on a small-time outlaw.

It was a keen satire of the last of the frontier days, but its hipness failed to rub off on me.

There are no featured audience reviews yet. Click the link below to see what others say about Kid Blue!