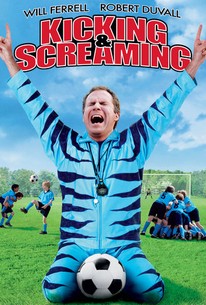 Critics Consensus: The script is mediocre and fails to give Ferrell a proper comedic showcase.

Critics Consensus: The script is mediocre and fails to give Ferrell a proper comedic showcase.

Critic Consensus: The script is mediocre and fails to give Ferrell a proper comedic showcase.

Will Ferrell stars as Phil Weston, an average Joe who's had to put up all his life with his overly competitive father, Buck (Robert Duvall). When Phil decides to coach his 10-year-old son's soccer team, he goes head-to-head for the league championship against Buck, who coaches his own young son on the preeminent team of the league. Old scores come into play as Phil and Buck find themselves going to extreme measures to win the championship trophy.

Will Ferrell
as Phil Weston

Mike Ditka
as Himself

It's all kept light and funny, but underlying the broad sight gags is a movie that actually has something to say about competition, fathers and sons, machismo and caffeine.

Will Ferrell has become the most unlikely embodiment of wholesome family fun since Fred MacMurray gave up film noir for My Three Sons.

This isn't the worst setup for a kiddie comedy, but it proves that Ferrell alone can't carry a film.

... a rather schizophrenic movie; groaningly familiar around the edges but with a pair of frighteningly unpredictable monsters at the centre.

A zero, but the title describes how the audience is likely to react, perfectly.

There is a bit of heart in Kicking and Screaming, with Ferrell and Duvall both giving nice performances.

Just too awkward and clunky to be enjoyable.

You may have to be dragged kicking and screaming to see this silly kiddie footie flick.

Is this all there is to Ferrell's career? Mediocre comedies, and wasted talent?

Director Jesse Dylan, desperate to avoid yawns, flails madly with staging, editing, slow motion -- any trick he can think of, whether it fits or works or not.

If this footy film was in a league it would be languishing at the bottom of the Vauxhall Conference.

Im sorry if you didnt like this, but I just enjoyed it. Will Ferell is my favorite comedian, and man this movie would suck without him. The story and everything else is pretty weak, but Ferell makes it work. With a few cliche and dumb moments, this movie was just okay, but Ferell just naturally made this a funny movie.

Another Will Ferrell vehicle. Kicking & Screaming is more of the same garbage that Ferrell serves up. A few snipits of the film are comical, but don't hold up because the humour gets stale and overuused too quickly. The film rellies too much on Ferrell's one trick antics to create it's humour and doesn't work. Ferrell was pretty good in Zoolander, and decent in Old School; but in this case, big budget studios use the same formula for every film he stars in, and use his one dimensional comedy to try to make something funny. It worked for maybe three films, but when you've spent 7 films doing the same thing, it gets old. Avoid.

Will Ferrel is great, and that's what saves this average comedy!

Will Ferrel as Will Ferrel. . a decent movie but hes playing the same role he has played in a lot of movies.