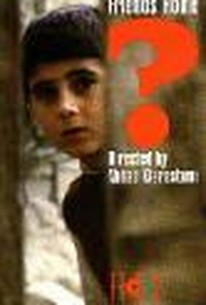 The film that established director Abbas Kiarostami's reputation outside his native Iran, Where Is the Friend's Home? tells a simple story in such a spare fashion, many critics found its impact to be almost subliminal. As the film opens Ahmed (Ahmed Ahmed Poor), a grade schooler, watches as his teacher (Kheda Barech Defai) berates a fellow student, Mohammed (Babek Ahmed Poor), for repeatedly failing to use his notebook for his homework , threatening expulsion on the next offense. When Ahmed returns home, he realizes he's accidentally taken Mohammed's notebook. Against his mother's orders, he sets out in search Mohammed's house, encountering false leads, dead ends, and distractions as he attempts to enlist adults in his search. ~ Keith Phipps, Rovi

Critic Reviews for Khane-ye doust kodjast? (Where is the Friend's Home?)

like the neorealist works from which it descends, deceptively simple and utterly profound

Its final image is one of such profound beauty that it rivals the iconic freeze-frame ending of Truffaut's The 400 Blows, perfectly capturing the sublime, gossamer belief in basic human kindness inherent in childhood.

On one level Kiarostami paints a society rooted in authoritarian demands, but on another he reminds how us kids get lost in the grown-up world of business and responsibility.

Or: How the whole world can fit into an Our Gang episode

I highly recommend all of Abbas Kiarostami's films, but to start with I'd suggest Where Is the Friend's Home, the simplest and most moving of his films.

The closest thing I've ever seen to an Iranian action film.

It's only because so many directors have done more with a similar set-up that Where is the Friend's Home? feels somewhat lacking.

Even though very little takes place, the eighty-three minutes seem to fly by in real time.

Audience Reviews for Khane-ye doust kodjast? (Where is the Friend's Home?)

Kiarostami crafts an incredibly sensitive and deceptively simple film that shows a lot about a strict society in which adults don't listen to children, creating a lingering impact on the viewer as we follow the action take place mostly from the point of view of a generous kid.

Cute but saddening tale from Kiarostami. Another great slice of Iranian life from the master director. I think the viewpoint of a child makes this all the more compelling. The child can squeeze in places and situations much more efficiently than an adult could in the same situation.

a really simple and lovely film that's a good place to start with kiarostami. the untrained child actors are marvelous here. a young boy has taken his friend's notebook by mistake and must return it to keep his friend from being expelled, but he doesn't know where the friend lives. the boy is blocked at every turn in his quest to do the right thing by adults who won't listen or help. nerve wracking suspense! and i am only half joking :p