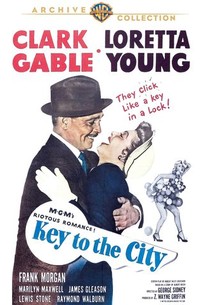 Key to the City Photos

George Sidney directs this pleasant romantic comedy concerning mayoral love. During a convention of mayors in San Francisco, Clarissa Standish (Loretta Young), the mayor of a small town in Maine, meets Steve Fisk (Clark Gable), the down-to-earth leader of a tiny northern California community. During the rowdy proceedings of the convention, the two find themselves pushed together frequently, with the typical result -- they fall in love. After the convention, the two head back to Steve's town, where crooked local politician Les Taggart (Raymond Burr) is squaring off against Fisk in a mayoral election. With the help of Clarissa, Steve gears up for his reelection bid.

Frank Wilcox
as Councilman
View All

Critic Reviews for Key to the City

The laughs are hard to come by.

Audience Reviews for Key to the City

Ordinary comedy of note more for its cast than any special quality the film itself possesses. Gable and Loretta Young are reunited for the only time after their torrid affair on the set of Call of the Wild resulted in a secret child who was one of Hollywood's most notorious open secrets. This was also Frank Morgan's final completed film, he started work on the disastrous Judy Garland version of Annie Get Your Gun but suffered a heart attack and passed away before the film was restarted with Betty Hutton. As for this picture's story its a bunch of silly nonsense of misunderstandings but the cast give it a game reading.

Key to the City Quotes