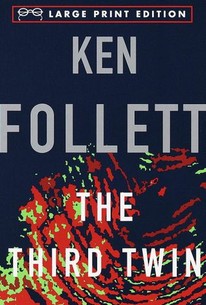 In this two-part suspenser inspired by Ken Follett's bestselling novel, university pscyhobiologist Jenny Ferrami (Kelly McGillis), in the process of studying a possible link between genetics and criminal behavior, stumbles upon a secret cloning experiment conducted by a major company. Figuring prominently in the proceedings is likeable law student Steve Logan (Jason Gedrick), who may or may not be the identical twin of a serial rapist. . .or possibly two rapists! It turns out that there are far more human "duplicates" in the world than Jenny could ever have imagined--and as she tracks down these clones to convince the public that there is dirty work afoot, sinister forces, tied in with a powerful triumverate, conspire to silence Jenny for keeps. Originally telecast by CBS, Ken Follett's The Third Twin first aired on November 9 and 11, 1997.

There are no critic reviews yet for Ken Follett's 'The Third Twin'. Keep checking Rotten Tomatoes for updates!

There are no featured reviews for Ken Follett's 'The Third Twin' at this time.