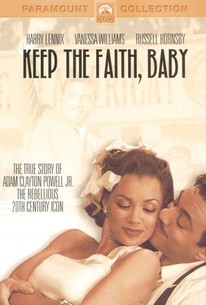 Adam Clayton Powell Jr. was one of the most important and most fascinating figures in the American civil rights movement. The son of the minister of Harlem's Abyssinian Baptist Church, then one of the largest African-American churches in America, Powell, in time, took over his father's place at the pulpit, but unlike his father, he saw his position in the church as an opportunity to attack political and economic injustice against racial minorities. Powell became a vocal political activist, helping to organize protests and rent strikes against landlords who were guilty of discrimination, and, in 1941, Powell decided to move more directly into politics by running for running for New York's city council. Powell won the seat, and, in 1945, he became only the second African-American to be elected to Congress. While Powell was a tireless advocate of issues of economic and racial inequality, he was also a political animal who wasn't above striking bargains with unions and political power brokers to achieve his ends, and his political bargaining, as well as his fervent denunciation of his enemies, earned him as many enemies as friends. While his leadership of the Congressional Education and Labor Committee allowed him to support a number of important social programs and he became one of the most visible and powerful African-American leaders in America, in the late '60s, accusations of corruption against Powell forced him to serve in absentia from the Caribbean island of Bimini. He died in 1972, little remembered and largely in disgrace, despite his many positive accomplishments (and the fact many of his "improprieties" were quite common among his colleagues in Congress). Keep the Faith, Baby! is a made-for-cable biography that re-creates Powell's remarkable life and accomplishments. Harry Lennix plays Powell; Vanessa Williams plays his second wife, jazz singer Hazel Scott; and Russel Hornsby appears as journalist Joe Schiller.

Rufus Crawford
as A. Philip Randolph

There are no critic reviews yet for Keep the Faith, Baby. Keep checking Rotten Tomatoes for updates!

There are no featured reviews for Keep the Faith, Baby at this time.