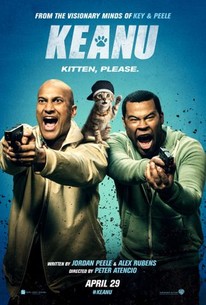 Critics Consensus: Keanu's absurd premise and compulsively watchable starring duo add up to an agreeably fast-paced comedy that hits more than enough targets to make up for the misses.

Critics Consensus: Keanu's absurd premise and compulsively watchable starring duo add up to an agreeably fast-paced comedy that hits more than enough targets to make up for the misses.

Critic Consensus: Keanu's absurd premise and compulsively watchable starring duo add up to an agreeably fast-paced comedy that hits more than enough targets to make up for the misses.

Keegan-Michael Key and Jordan Peele star in this comedy as two friends posing as drug dealers to get back a stolen cat. Peter Atencio directed.

Will Forte
as Hulka

Jordyn A. Davis
as Belle

Nicholas Hayner
as Guard #2
View All

21 SXSW Premieres We’ll Never Forget
Cats vs Dogs: Who Have The Best Movies?
On DVD This Week: Keanu, The Lobster, The Knick, and More

With such a cute cat and such a quirky screenplay, the film seems destined for some kind of cult status.

Keanu is cool and breezy enough to live up to its title amply.

You probably have to make a fan-following investment in their career to like it.

A lot less inspired that you'd think it would be, though, yes, the cat is cute.

The affection between its writer-stars is infectious and the script is loaded with great gags.

Not bad for a first feature. And a mad-cute kitten. Help it make some money this weekend so they can all do it again.

Has its moments of good fun, but like many before them who have discovered the difficulty of making the comic transition from small screen to big screen, Key and Peele's first venture into the movies seems ultimately disposable.

As a clever, kooky comedy with the expected touch of satire usually served up by its stars, Keanu is repeatedly watchable for the fans of Key and Peele, as well as fans of kittens everywhere.

As a recent comedy goes, Keanu is above average and works on many levels. The story was cute and the cat(s) even cuter - not to mention pretty good at acting.

Keanu is basically a 90+ minute sketch from the "Key & Peele" show. And that does make it derivative at times, with several obvious riffs on their best bits. But it's also nonstop, top-to-bottom funny in every avenue available.

The story is a classic fish out of water, bromance vehicle that many TV-to-film stories follow when they first make the jump onto the silver screen.

A bit uneven at times, but when it fires it's as funny and smart as anything in recent memory.

It's a glorified episode of Key and Peele that has enough humor to cover up the pure nonsense. Keanu combines cute-kitty love & the quirky duo of its leads for a silly, wacky film that is senseless to its core but capable of a good number of laughs along the way. 3.5/5

The gist of most of the humor revolves around the ol' chestnut of people who are not black trying to sound, talk, and act "black" (even if they are black? Doesn't matter, it's still the same old tired joke = "black" is funny, har-de-har-har "dey iz so stupid"). If that spins yer prop then this is for you.

Jordan Peele and Keegan Michael-Key are gifted comedic performers, as often evidenced from their often-brilliant sketch comedy show Key & Peele. It was only a matter of time before they made the leap to feature-film players, and Keanu is a suitable springboard for the gents that portends to even better future results. Relying upon mistaken identity bluffs, Peele and Key play a pair of relatively straight-laced men who pretend to be violent gangsters in order to retrieve Peele's stolen kitten. Fortunately, the movie doesn't feel like an overextended sketch though it does have its narrative detours that dawdle (a celebrity drug deal is padded out with far too few jokes), running jokes that hold on for a beat too long and then some (the George Michael fascination culminates in a drug sequence that does absolutely nothing), and there are missed opportunities that seem obvious (Key using his new gangster friends to intimidate a man making advances on his wife). Will Forte's hip-hop loving drug dealer feels like a character nobody knew what to do with, including Forte. What doesn't disappoint is the natural comic chemistry of its leads as well as the movie's ability to surprise, zigging rather than zagging, and finding small jokes just as satisfying as larger set pieces. I enjoyed when the guys insecurity butted against their bravado, like when Peele is trying to deflect credit for helping his new pal to do some very bad things. The onscreen action is somewhere between the wackier world of 21 Jump Street and the grisly, unfunny world of Pineapple Express but at least the filmmakers realize that an action-comedy still needs to present its action through a comic lens. I was laughing consistently throughout though it was mostly at a chuckle level, if I were to be honest. Keanu is a fairly fun comedy that you can't help but thinking could have been more refined during its structureless periods, but then another joke appears and it's hard to get too upset with the final enterprise. Keanu is funny enough but you sense that a better vehicle is on the horizon for these two gifted comedians. Oh and the cat is powerfully adorable. Nate's Grade: B

Ever since Keegan-Michael Key and Jordan Peele got their start on Comedy Central in their hit television show, "Key and Peele," their fans have been wanting to see more of them. A couple years ago, they announced that they would be working on their first feature film. When the plot and title of this film was announced, it was clearly a wink at the Keanu Reeves film "John Wick." When the trailer for "Keanu" hit the internet, people were buzzing from the start, due to it's cute appeal, while still being an R-Rated action/comedy. The similarities to "John Wick" were unparalleled. Now, the question is, is the film good? Happily, "Keanu" is an absolute joy of a film, even though the originality comes from the "John Wick" backbone. As a film on it's own, it works on many levels. As a kitten is helmed by a drug lord, upon his demise it escapes, running into the life of Rell Williams. After a few weeks of taking special care of him, he is kidnapped. Acquiring the help of his cousin Clarence, they go off on a crazy adventure to retrieve the cat. With cameos, action scenes that are a blast to watch, and cleverly written comedy, "Keanu" is very fun entertainment. Personally, I enjoy this style of humour, but it is admittedly not for everyone. With excessive swearing and gore throughout, some people may be turned off, but the way these elements are implemented into the film, works toward it's context. As I was viewing this film, I was calling it a spoof of "John Wick," due to certain scenes that make it blatantly obvious. It is clearly a film that has been influenced, but it does not rely on that to drive the entire film. It sets up many side plots along the way that have great payoffs in the end. The gangs they get involved with have much more to them than meets the eye, the character building of Clarence is terrific and the family element of the film has a terrific conclusion. I will say that comedy is one of the hardest things to write, especially in feature film form. You have to be able to keep the audience enthralled the entire way through, or they will otherwise lose interest, making the film dull, despite a few comedic moments. "Keanu" does have a few slow moments, but the dramatic undertone with some of the main characters definitely makes up for that. This is a very well-written comedy, and given the plot, it could have been a disaster. Both Jordan Peele and Keegan-Michael Key have very long futures in comedy together or apart. There are some gut-punching gags here, along with great action and emotional heft, which is high praise when talking about a film that involves gangs killing each other over a cat. This film is ridiculous in all the best ways. It may feel it's length at times and the comedy may not hit 100% of the time, but it is a very enjoyable theatre experience, especially with a crowd. "Keanu" is great fun that I can surely recommend to both comedy fans and to fans of the film "John Wick." To be in on the jokes, it would be better to have seen the film "John Wick," but it is not necessary as they take the time to make it it's own thing. I can't wait to see more from this duo.