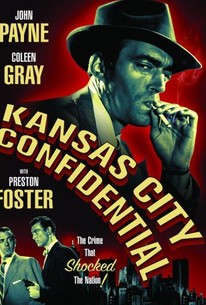 Kansas City Confidential, Phil Karlson's low (low) budget, B-grade film noir, opens on a Kansas City armored-car robbery perpetrated by cynical, corrupt ex-policeman Timothy Foster (Preston S. Foster). Foster devises an outrageous scheme: he will recruit three of the most vicious and unrelenting criminals he can find (screen heavies Lee Van Cleef, Jack Elam and Neville Brand) to undertake a robbery, blackmailing them into the heist with incriminating evidence from other "jobs." As an eccentric and clever conceit, Foster forces each of the perpetrators to wear masks, thus concealing their identities from one another and preventing the old pitfall of the men squealing and backstabbing. The heist comes off without a scratch, but a complication arises when the ignorant cops pick up an unrelated fellow, Joe Rolfe (John Payne) for his ownership of a van similar to the one used in the caper. In time, Rolfe is cleared, but he grows irate over the accusations and sets off to find Foster and co. and teach them a lesson. He finally happens upon one of the perpetrators in Mexico, beats him nearly to death, and assumes the victim's identity - and that's when things really get complicated. Though produced under the Hays Code censorship regulations, Kansas City Confidential constituted one of the most brutal and violent crime pictures made up through that time; as such, it retains historical significance. It also claims a strong cult following.

Terse and tough, Kansas City Confidential is one of the great lean, mean B crime thrillers, with a bang-up opening, a deadly payoff and a shifting set of identities and alliances that keep pulling the rug from under our hero.

A down and dirty picture with all the requisite blood, sweat and double-crosses. ... The biggest thrill is watching Jack Elam as the most nervous of the hoods.

If Kansas City Confidential was a meal, it would consist of a plate full of spice - but no meat.

Terse and tough, Kansas City Confidential is one of the great lean, mean B crime thrillers...

Falls into that rarefied early-'50s cycle of noir, which benefited from B directors who had learned how to quickly dispense with the genre conventions and deliver brutal action and lurid innuendos.

It's a decent film, but its payoff just isn't up to the level of its buildup.

Phil Karlson's rote heist-revenge flick aims to be stone cold, but can't seem to get any frost to grow around its warm, mushy heart.

A perfect crime needs a perfect fall guy and, after 3 beatings by police questioners, this fall guy goes looking for the guys that set him up. There's plenty of gunplay and fisticuffs in this tough story about tough guys in a tough world, lots of tension, twists and turns, but it's worth it by the end.

Good but not great noir has a decent story and fine acting but could have been a little more tightly directed. Still if you're a fan of the genre this is an entry to watch.

In spite of it's faults (campy dialog, boneheaded criminals, cheesy ending, etc.) Kansas City Confidential is still a keystone in the evolution of the classic heist film. Essential viewing for fans of the genre.