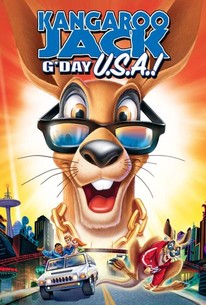 You just can't keep a good kangaroo down, and when a group of poachers attempts to kidnap Jackie Legs and make way for the U.S.A., Charlie, Louis, and Jessie must jump into action in this animated sequel to the comedy hit Kangaroo Jack. Just when the thieving kangaroo-nappers land in Las Vegas with a scheme to cash in on their newly acquired marsupial, his old friends show up to rescue the wily roo and save the day. As if saving their old friend Jack wasn't enough trouble, the heroic trio must also contend with the FBI, who have them under surveillance as the prime suspects in a complex international diamond heist.

There are no featured audience reviews yet. Click the link below to see what others say about Kangaroo Jack: G'day U.S.A.!